I bear an emotional attachment with Gandhi Maidan, Patna, especially when there is any political rally. This occasion accords an opportunity for the die hard socialist residing within my deep self, to stand witness to the most downtrodden, meek, submissive, underdog, underprivileged lot of Bihar, standing in unison and expressing themselves most vocally with unprecedented firepower, symbolizing hope, expectation and confidence.

Today’s assemblage of around one hundred thousand people was no different and any seasoned journalist would describe it as a ‘typical’ Lalu rally. Swarms of young, boisterous, expectant, highly emotionalized, semi-urban youths, mostly from the underprivileged sections of the society, occupied virtually every nook and corner of the space running straight from the dais to almost half of Gandhi Maidan. This was the crowd that presents the sharpest contrast to the skillfully well organized but highly venomous ABVP and RSS managed shows. It  was around 3 PM when I entered the field and the man who is likely to play the role of the legendary Jai Prakash Narayan in the present efforts to unseat the fascist BJP, Sharad Yadav was speaking. Sharad was and remains a rare symbol of statesmanship, whether he speaks inside the parliament, at rallies, or at press conferences. Piecing together his four decade long experience, he came down heavily on the politics of one-upmanship, opportunism, communalism, corporatism and corruption.  Within minutes it became obvious the massive crowds had flocked to hear the man, who had relinquished the offer of ministerial berth and financial rewards, and this was highly encouraging. Sharad repeatedly drew applause from the youths who felt cheated and had been on the verge of despair ever since the break-up’ of the grand alliance. He ended with massive exhortation to the gathering, to raise their hands with clenched fists and pledge their commitment to uproot the opportunist and communal powers, that was responded to with equal vigor. 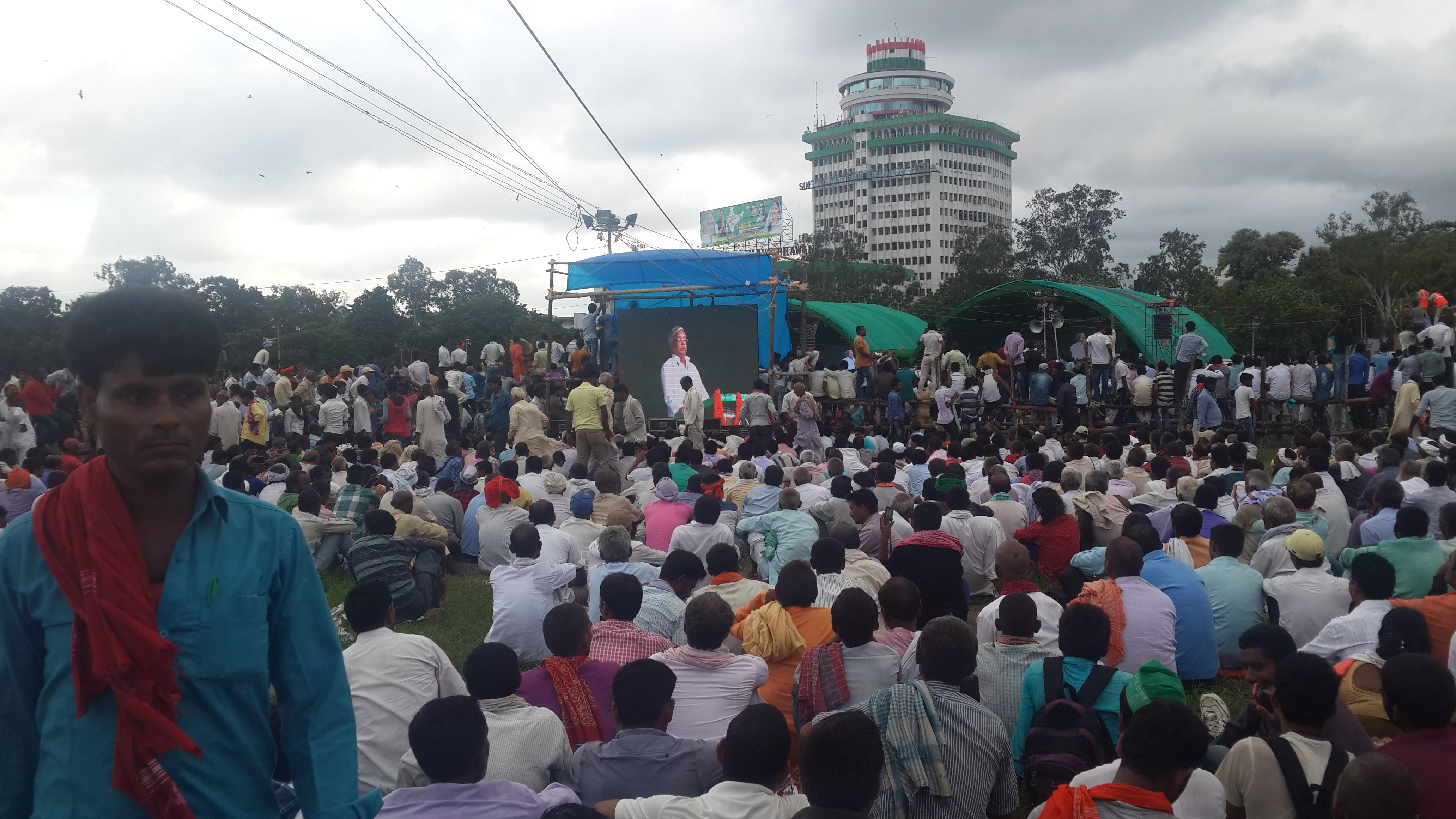 Tej Pratap played a cameo,  describing his role as Lord Krishna guiding ‘his’ Arjun, younger brother Tejashwi. Announcing the start of the war with blowing of conch-shell, he literally enacted the mythological scene to a thundering applause.

It was now the turn of the Bengal Tigress, Mamata Banerjee and it is indeed a wonder a senior most politician like her still keeps improving her fluency, diction, expression and commitment. She deftly mixed Hindi, with streaks of Bangla and Bhojpuri to cast a hypnotizing spell on the crowd. She showered praises on Lalu for his commitment to politics of secularism and social justice and acknowledged the future role of Tejashwii and Akhilesh Yadav. Her biggest draw was the severe attack on the politics of delusion, threat and conspiracy of BJP and its allies.

As the weather played hide and seek, with clouds hovering for most part of the day and a slight drizzle that helped all with giving a cool respite, all the speakers claimed GOD’s hand as expected in the successful conduct of the rally.

The meeting was presided over by RJD president Lalu Prasad Yadav who had the misfortune to speak to a largely satiated young crowd, apparently tired after sloganeering and cheering for Tejashwi, Tej Pratap, Akhilesh not to speak of Sharad and Mamta. And just before the chairperson’s  address, Rabri Devi too played from the front, accusing Nitish Kumar of crony corruption and casteism that too Nalanda based. She played to the gallery, calling every youth her own child at par with Tej Pratap and Tejashwi.

Those who were out to count heads failed to notice that a being a typical emotion drenched Lalu show, there was little space for discipline or organized behavior. The crowds behavior was spontaneous in more than one way. The way they stood for over six hours, breaking all the barriers, crushing VIP chairs, climbing atop security towers and jostling with police and para military personnel there, a fact that found mention in Mamata’s speech, it was clear Lalu magic has indeed survived. The very fact that so many people had jampacked into a very small space around the stage; virtually no ‘inter-personal’ space left literally,  made it seem like a small crowd when viewed from a distance. I had entered the very interior of this sea of humanity and as Tej Pratap raised the war cry and started raining down his punches, driving the youthful crowds into fits of frenzy.

Established the poor man’s ultimate ‘showman and saviour’  Lalu’s biggest success was not just mobilizing crowds but also bringing together 19 non-BJP parties and establishing a front that gives some hope to everybody who is against current trend of governance.

Liked it? Take a second to support Udayan Roy on Patreon!

Nitish is finished, a direct fight between the RJD and the BJP in Bihar: Lalu Prasad Yadav

May 16, 2019 The TMC Desk General Elections 2019 Comments Off on Rahul will play ‘central role’ in formation of new govt: Tejashwi

A coalition of progressive parties will come together to form the next government and Congress president Rahul Gandhi will play a “central role” in the formation of the new dispensation, RJD leader Tejashwi Yadav said […]

–TMC Desk Kolkata, Nov 24:West Bengal Chief Minister Mamata Banerjee on Friday threw enough hints that she is not averse to taking the lead in bringing together opposition parties on a single platform against the […]