The Public Health Engineering Department (PHED), Bihar has released a provisional merit list of candidates for the recruitment of junior engineer (JE) yesterday on its official website, phed.bih.nic.in. According to the list, the maximum marks are obtained by a candidate named Sunny Leone.

Leone, in the official result of the the department, is a 27-year-old single woman with five years of work experience. Her father is Leona Leone and she belongs to the General category. The applicant has obtained 73.50 points based on her academic record and full marks of 25 points based on her experience. The total of the two makes her top the merit list with 98.50 score.

The third top rank holder is someone whose name is written in mnemonics. He is a male belonging to EBC category. Father of Second topper is Om Puri that also looks suspicious.

“This is a mischief done by someone. The list has been uploaded as it is based on the data received by the candidates. Whoever filled their name, fathers’ name and other details in the application form, the list shows the same as is and no data has been entered by the department.” Indian Express quoted Joint Secretary, PHED, Ashok Kumar, as clarifying.

A total of 17,911 candidates had registered for the exam and marks of each one of them have been displayed online. A total of 214 vacancies are to be filled by the recruitment exam. For the next round, 642 candidates (thrice the number of vacancies) will be shortlisted based on their score and ‘Sunny Leone’ is one of the contenders for the government exam. 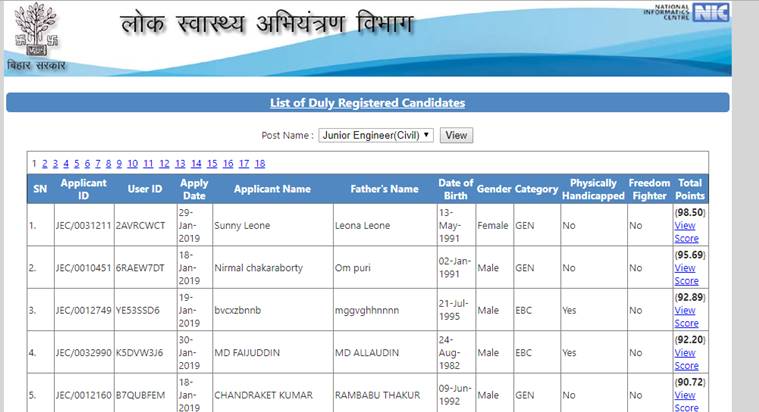 The shortlisted candidates will have to produce documents to justify the information as displayed in the list, wherein, the department according to Kumar will eliminate such ‘miscreants’.

Meanwhile, the department has given a window to candidates to correct the information provided in their application. The correction window is open till February 24, 2019.