Since the murder of Ranvir Sena’s Chief, the CBI has announced rewards of Rs. 10 lakhs twice for providing important lead in the case but failed to get any

Since 10 years of the murder of the banned militant outfit Ranvir Sena’s founder Brahmeshwar Nath Singh alias Brahmeshwar Mukhiya, India’s premier investigating agency, the Central Bureau of Investigation has failed to nail the killers in spite of announcing a handsome reward of Rs. 10 lakhs twice for providing important clue in the case. However, it seems possible to solve the case for the agency as a former IPS Officer claimed to have told the CBI the name who had murdered the notorious Mukhiya.

Amitabh Kumar Das, a 1994 batch IPS Officer shared a letter on Facebook which he wrote to the CBI director has named Hulas Pandey, the man behind the murder of the Sena chief. 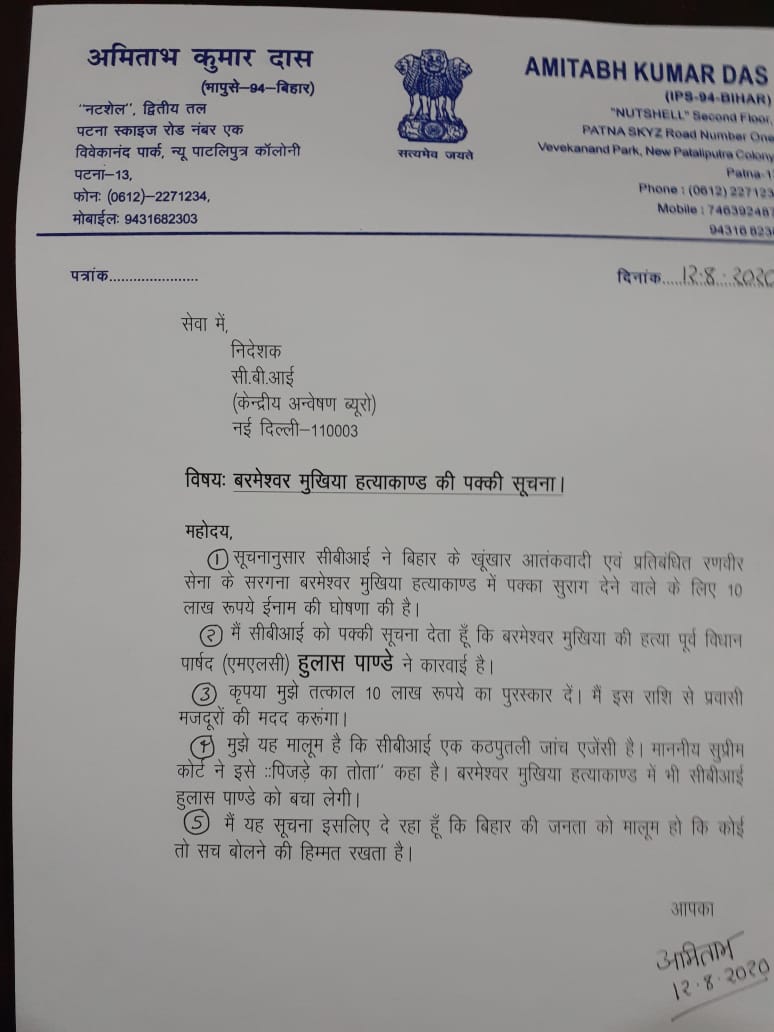 In his 5 points letter, Mr. Das said that he had an accurate piece of information that Hulas Pandey, former MLC was behind the murder of Brahmeshwar. He requested the CBI to award him Rs. ten lakhs immediately for he wanted to help the migrant workers with this reward money.

In the same letter to the CBI, Mr. Das lashed out peculiarly at the functioning of the CBI, wrote that he knew the CBI is a puppet investigating agency and it would save Pandey in the Mukhiya’s murder case.

“I know that CBI is a puppet investigating agency. Honourable Supreme Court has called it a caged parrot. CBI will save Hulas Pandey in Brahmeshwar Mukhiya’s murder case,” he wrote.

“I am informing this to let the people of Bihar know that someone is there who can dare tell the truth,” he further wrote.

In a conversation with The Morning Chronicle, Mr. Das said that due to his long period of police service he has had a network of informers and he is damn sure that Hullas Pandey, ex MLC is the man CBI wants.

“I attached the same letter with an email to the CBI and would also be posting this on Thursday,” he added.

Mukhia, who had founded Ranveer Sena, a militant outfit of Bhumihars and Rajputs of Magadh region of Bihar, was killed on June 1, 2012, at Ara in Bhojpur district, about 50 km away from Patna.

The day he was murdered, this region of Bihar had seen large scale violence by his followers. Hundreds of vehicles were burnt down and private and public property worth of crores of rupees was damaged. Initially, his followers had blamed the then JD (U) MLA Narendra Pandey alias Sunil Pandey for his murder.

A special investigation team (SIT) was formed under the supervision of Sahabad range DIG Ajitabh Kumar to solve the case within a month. The SIT was dissolved in July 2012 after it submitted its report.

Later, the then Bhojpur SP M R Nayak took charge of the investigation before the probe was handed over to the CBI. Since then, the CBI has examinaed scores of suspects but away from the prime culprit.

The police had named eight persons as accused and arrested six of them. However, all six were later granted bail as the police failed to prove the involvement in the case.

The CBI in December 2016 and July 2019 had announced Rs. 10 lakh reawrd to any person for providing subtantial lead in the case.

Brahmeshwar was accused of plotting 29 caste massacres and killing more than 300 people belonging to the extremely backward caste and scheduled castes in different parts of Bihar. His first notorious massacre of more than two dozens Dalit at Shankarbigha village in Jehanabad district of Bihar was on the eve of Republic Day (25 January) in 1999 when the first Dalit President of India K R Narayanan was delivering the Republic Day speech.

When India is governed by a Chor-Chowkidar with a fake BA degree, it is reassuring to see that all countries in the world are not so unlucky. These days, I have turned into an ardent […]

Narendrabhai Damodardas Modi’s chest reportedly measures 56-inch. And he doesn’t allow his wife Jashodaben to enter his house! Modi Bhakts compare him with Gautam Buddha who left his wife when the poor lady was asleep. […]

Today, the world is celebrating Gandhiji’s 150th birth anniversary. The 150th Gandhi Jayanti. It is not easy to write on Gandhi, one of the greatest human beings the Planet Earth has ever seen. After Gandhiji’s […]