1960s arrived. The 500th birth anniversary of Vidyapati! For the uninitiated, Vidyapati is the greatest of all Maithili poets. Maithili, as the name suggests, is the language of Mithila in North Bihar. My Ma-Babooji, my parents, talked to each other in Maithili.

Some Maithils claim that Maithili is the sweetest language on the Planet Earth. I beg to differ. How can you measure the “sweetness” of a language. To my liberal mind, all languages are sweet. I don’t understand Bengali. But I find Bengali as sweet as a roshogulla! I can’t write Urdu. But Urdu, Chacha Ghalib’s language, is as sweet as honey!

Anyway, Vidyapati wrote in Maithili. His poems are still sung in Mithila’s “aamak gachhi” (mango orchards). When I was a schoolboy, I had Vidyapati’s  poem in my textbook. “Aayal ho rituraj basant” (Spring, the King of Seasons, has arrived!). I was such a wonderful poem. I still remember a sentence: “Dinkar kiran bhel paugand” (Sun rays have become bright). And Vidyapati was a great devotee of Goddess Durga. His song “Jai, jai Bhairvi” has become the unofficial anthem of Mithila. Sung at every cultural function without fail. As a staunch Marxist, I don’t believe in gods and goddesses. But whenever I  hear “Jai, jai Bhairvi” I am transported back to my childhood days when loudspeakers played this song day and night in Darbhanga, my hometown. 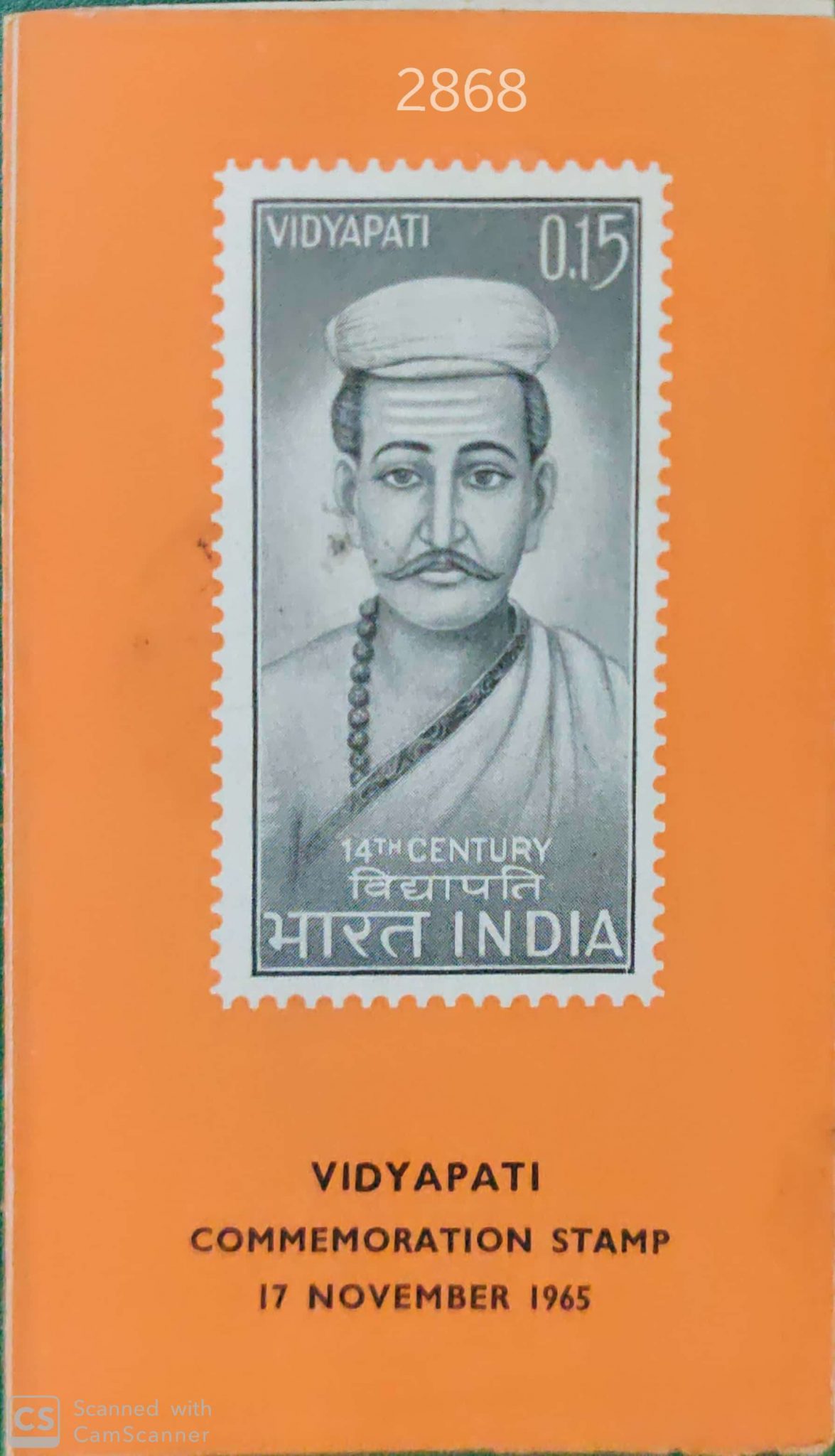 Vidyapati also inspired Rabindranath Tagore. As a budding poet, Tagore wrote poems using the penname “Bhanu Singh”. He was too shy to use his own name. His “Bhanu Singher Padavali ” bears the distinct mark of Vidyapati.

The Postal Department decided to issue a postage stamp on Vidyapati to commemorate his 500th birth anniversary. But there was a hitch. The Postal Department didn’t know how Vidyapati looked like.  There were neither paintings nor statues of the Maithil Kokil. After a lot of brainstorming, the Department decided to crowd source. Notices were put in different newspapers. Readers were requested to send Vidyapati ‘s paintings to the Postal Department. Hundreds of the Maithils read those notices. Now Mithila is a land full of wise men and women. The famous wit Gonu Jha was also from Mithila. As a kid I heard several Gonu Jha stories from my “dadi” who called me Sona Babu (the golden boy). She smoked a “hukka” and regaled me with Gonu Jha stories as I doubled up with laughter.

In the painting, his Babooji was wearing a “paag” (the Mithila cap). As a pious Hindu, he had a “tilak” on his forehead and a “rudraksha mala” around his neck. His face glowed with wisdom. His moustache brightened his face.

As “Vidyapati”‘s  face appeared on stamps , his statues also came up everywhere in Mithila. The wise man smiled. His Babooji showered blessings from heaven on his “sapoot”! I don’t approve of the means adopted by the “wise” man. But his devotion to his Babooji is matchless. How many of us can put our dads ‘ pictures on postage stamps?

November 20, 2019 The TMC Desk Left is Right Comments Off on Hindustan is proud of Pandit Firoz Khan

Book Review: The Sarkari Mussalman is a poor PR exercise

November 3, 2018 The TMC Desk Literature Comments Off on Book Review: The Sarkari Mussalman is a poor PR exercise