Hyderabad (Telangana), May 20, 2018 (TMC Desk) Homeless beggars, ragpickers and labourers sitting with plates on a mat are waiting under a flyover. As the clock strikes 12.30 pm, a slim man appears on the scene and starts serving hot rice and dal.

Dabeerpura flyover in the old city has been witnessing this every day since 2012 and not a single day goes without the hungry gathering there for lunch or the man not serving them food. Meet Syed Osman Azhar Maqsusi, who works with unflinching zeal to satiate the hunger of the needy with apt slogan ‘hunger has no religion’.

As someone who lost his father at the age of four and who himself experienced the pangs of hunger, Azhar understands their pangs and is ready to do whatever possible to alleviate their suffering.

It was a chance encounter with a homeless woman near the same flyover six years ago which motivated him to launch the free food programme. “Lakshmi was crying due to hunger. I arranged food for her and decided to do everything within my limited means to remove the hunger of as many people as possible,” recalled the 36-year-old.

Initially, his wife used to cook the food at home and he used to bring the same to flyover for serving the needy. Later, he started cooking under the flyover to save the cost on transportation.

“It started with 30-35 people and today more than 150 people are being provided food here,” said Azhar, who now runs the Sani Welfare Foundation and has hired two cooks.

Three years ago, he extended this work to Gandhi Hospital, the biggest government-run facility in Secunderabad, the twin city of Hyderabad. A van of the foundation transports food for 150-200 people every day.

The Foundation along with NGOs is also running daily food programmes in Bengaluru, Guwahati, Raichur and Tandur.

Azhar is happy that the work which he started alone has motivated many individuals and organizations. “Today you can see many people distributing free food among the needy at various places in the city,” says Azhar with a sense of achievement.

He, however, believes that his dream will come true only when hunger is eliminated from this country and the world. “There should be nothing called hunger,” says Azhar.

He runs a Plaster-of-Paris unit near Dabeerpura and spends a few hours every morning and evening there. “The rest of the time I spend in arranging food at both the places,” said Azhar, who is helped by his brother, his cousin and a couple of volunteers on weekends. 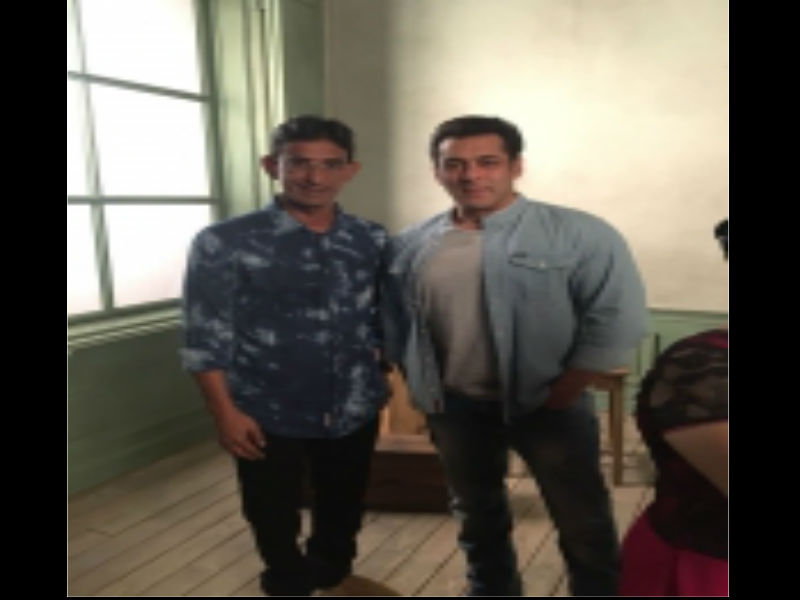 As Azhar sat in his shop, a donor arrived with three bags of rice on his two-wheeler and Azhar himself unloaded the bags.

Last month, he was invited by actor Salman Khan to Mumbai for an event of his foundation “Being Human”. Selected as one of the six real-life heroes from across the country, Azhar had conversation and photoshoot with the actor. The social worker was earlier on a show ‘Aaj ki raat hai zindagi’ hosted by Amitabh Bacchan. Various organizations have also honoured him.

Azhar, however, remained down to earth. “I don’t have an office or staff. There is no change in my lifestyle.”

He doesn’t collect funds. “If people come with donations in the form of rice and dal, I accept it. I don’t accept cash unless the donor is not in a position to bring rice or dal,” he said.

Third among the four siblings, he dropped out of school when he was in fifth standard and started working as a labourer.

“We used to live in my grandfather’s house. He also had a big family to look after. We used to get food once a day and sometimes even that was not available. But whatever may be the situation, we should remain thankful to the almighty Allah.”

For Azhar, the biggest inspiration is his mother, who struggled to bring them up. He believes that Allah is arranging food for the hungry and the needy through him.

“It doesn’t matter who is coming to eat. All I know is they are hungry. It’s in their destiny. Dane dane pe likha hai khane wale ka naam (Every crumb you get to eat has your name on it),” adds Azhar.

-Archana Sharma Jodhpur (Rajasthan), April 5, 2018 (TMC Desk) Bollywood superstar Salman Khan was sentenced to five years of imprisonment by a court here on Thursday in the 1998 blackbuck poaching case, while the other four […]