This is the first time that Indians are praising Pakistan. Actually, it is not because Pakistan has left sponsoring terrorism in Kashmir or promised to be the best buddy of India for ever. It is because the Supreme Court of Pakistan has disowned Nawaz Sharif from holding prime ministerial office in a landmark decision on the Panama Papers case.

If you remember Panama Papers case, you must remember that so many names from India were also appeared in the list.

What is Panama Papers case?

Panama Papers are actually the files of a Panamanian law firm and corporate service provider Mossack Fonseca & Co. which is the fourth largest company provider for offshore financial services. Documents were obtained by the German newspaper Sueddeutsche Zeitung and shared with the International Consortium of Investigative Journalists (ICIJ). The ICIJ then worked with journalists from 107 media organisations in 76 countries, including UK newspaper the Guardian, the Indian Express in India to analyse the documents over a year. Who leaked the papers actually is not known, however, the firm says it was hacked from servers based abroad. The leak has revealed how the wealthy and powerful use tax havens to get around the law.

Interesting to mention that in spite of solid proofs of money laundering in leaked Papers, a very few persons have been charged and resigned among the very few resigned,  two heads of the state, first being the prime minister of Iceland and next to him is Pakistan’s prime minister Nawaz Sharif.

However, with Nawaz Sharif ouster, Indians are praising Pakistan judiciary and asking Indian authorities questions, when those involved in looting national resources will be met with their fate.

Office of RG says that “Pakistan Prime Minister’s name appeared in Panama Papers, he has resigned, Chief Minister of Chhattisgarh’s name also appeared but no resignation from him”

National Spokesperson of Congress Party has said on Twitter “#PanamaPapers, that one rare, exceptional moment when India can learn from Pakistan, happens when Narendra Modi is our PM.”

Rana Ayub, famous for  her book Gujarat Files has tweeted, “His friend from Pakistan has been disqualified as PM in #PanamaVerdict but he will ensure no harm to Indians named in Panama. What a man” 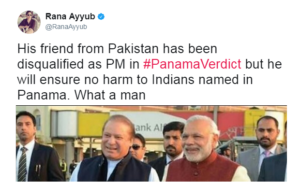 History of India says “An Old customer of Panama offshore firm introducing a Newbie to a reputed Broker in order to help him in opening a Panama account. (2016).” 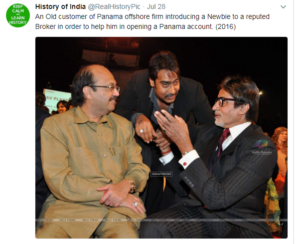 Swati Sachdeva‏, one of the Twitteratti tweets, “For the first Time feeling jealous of #Pakistan such bold judgement. Wow! #PanamaPapers #PanamaVerdict.”

Geet Varun says “BlackMoney is Very Useful in Bhashans & Prachar. Zero Action on the Ground by Modi Sarkar, While  PanamaVerdict Out in Pak #PanamaPapers”.

Madhuri Danthala, a columnist and political analyst, who is followed by many dignitaries writes “India is safer than ever. Be it Lynch Mob or Corrupted Mob All u have to do is to chant RIGHT Mantra #PaNaMo #PanamaCase”

A social activist from Bihar in India jokingly said “Thanks that Lalu Prasad Yadava’s name was not cropped up in the files, otherwise, the case would have been solved very early.”

Pakistan must end reliance on US aid: Nawaz

Outside interference in Maldives will complicate situation: China warns India

February 7, 2018 The TMC Desk India, Politics, World Comments Off on Outside interference in Maldives will complicate situation: China warns India

–Gaurav Sharma Beijing, Feb 7: China on Wednesday indirectly cautioned India against intervening in the Maldives, saying any outside “interference” in the country’s political crisis would “complicate” the situation – a day after the exiled former […]