Honourable Members, I would like to acknowledge my deep gratitude and appreciation to Honourable Speaker and the Honourable Chairman, Rajya Sabha and Honourable Members of Parliament for organizing this farewell ceremony on the eve of my demitting office as the 13th President of the Republic of India.

Honourable Members, if I say I am a creation of this Parliament. It shaped by political outlook and persona. Bear with me if I feel nostalgic and indulge myself by going back to the past. On 26th January 1950, the Constitution of India came into effect. In a remarkable display of idealism and courage, we the people of India gave to ourselves a sovereign democratic republic to secure to all its citizens justice, liberty and equality. We undertook to promote amongst all citizens fraternity, the dignity of the individual and the unity of the nation. These ideals became the lodestars of the modern Indian state. The Indian Constitution consisting of 395 Articles and 12 Schedules is not merely a legal document for administration but the Magna Carta of socio-economic transformation of the country. It represents the hopes and aspirations of the billion plus Indians.

Hon’ble Members, when I first entered the portals of this hallowed institution 48 years ago, I was only 34 years old. In July 1969, I came to this Parliament as a member of Rajya Sabha representing one of the six seats from the State of West Bengal. My election to Rajya Sabha took place on 4th July and the first session I attended began on July 22nd, 1969. 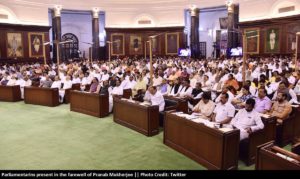 Hon’ble Members, since then, for 37 years I served as a Member of Lok Sabha and Rajya Sabha. Of these, I served five terms as a Member of the Rajya Sabha, elected for four terms from West Bengal and one term from Gujarat, and two terms in the Lok Sabha. My long career has been instructive and educative. I entered Parliament at a time when the Rajya Sabha was full of experienced Parliamentarians and leaders of the freedom movement, many of whom were brilliant speakers: M.C. Chagla, Ajit Prasad Jain, Jairamdas Daulatram, Bhupesh Gupta, Joachim Alva, Mahavir Tyagi, Raj Narain, Bhai Mahavir, Loknath Misra, Chitta Basu and many more. In fact, Bhupesh Gupta was truly a legend in the Rajya Sabha. Dahyabhai Patel and Maniben Patel, Sardar Vallabhbhai Patel’s son and daughter, represented Swatantra Party in the Parliament. My years in Parliament were further enriched by the wisdom of P.V. Narasimha Rao, oration of Atal Bihari Vajpayee, cryptic one-liners of Madhu Limaye and Dr. Nath Pai, wit and humour of Piloo Modi, poetic discourses of Hiren Mukherjee, razor sharp repartee of Indrajit Gupta, calming presence of Dr. Manmohan Singh, mature advice of L.K. Advani and passionate support of Sonia Gandhi on social legislations.

My career as a Parliamentarian was no doubt mentored by Shrimati Indira Gandhi. Her steely determination, clarity of thought and decisive actions made her a towering personality. She never hesitated to call a spade a spade. I remember after the defeat of Congress in the post-Emergency election, we had gone to London in November, 1978. A large number of media persons in a fairly aggressive mood were waiting to ask Shrimati Gandhi questions. The first question that was flung at her was, “What have been your gains from the Emergency?” Looking at the journalist squarely in the eye, in a level voice, Indira Gandhi replied, “In those 21 months, we comprehensively managed to alienate all sections of Indian people.” Big silence followed by loud laughter! Not one question was asked after that and the media persons just melted away. And I also learnt an early lesson of acknowledging my mistakes and rectifying them. Self-correction in such situations is always a better option than self-justification.

Hon’ble Members, in those days, both the Houses of the Parliament used to reverberate with animated discussions and illuminative and exhaustive debates on social and financial legislations. Listening to the stalwarts for hours and days in Parliament sitting in the Treasury or Opposition Benches, I felt one with the soul of this living institution. I understood the real value of debate, discussion and dissent. I realized how disruption hurts the opposition more than the government as it denies them the opportunity to raise the concerns of the people. I internalized the essence of what Pandit Jawaharlal Nehru had said (and I quote): “There has always to be balancing of change and continuity. The system of parliamentary democracy embodies these principles of change and continuity. And it is up to those who function in this system, members of the House and the numerous others who are part of this system, to increase the pace of change, to make it as fast as they like, subject to the principle of continuity. If continuity is broken, we become rootless and the system of parliamentary democracy breaks down” (unquote). I experienced the joy of the enactment of pro-poor and pro-farmer legislations. The recent passage of Goods and Services Tax and its launch on 1st July is a shining example of co-operative federalism and speaks volumes for the maturity of Indian Parliament. To be a part of this system is a unique experience and I am grateful to the people of this great country for giving me that opportunity.

I had the privilege of being a witness and a participant in the unfolding scenario of emergence of a great India. An India where 130 crore people belonging to three major ethnic groups – Aryans, Dravidians and Mongoloids – practicing 7 major religions and speaking 122 languages in daily lives live under one Constitution, one flag and one administrative system.

Hon’ble Members, not a single part of this vast territory of 3.3 million square kilometers of landmass and islands is unrepresented in the Parliament. 543 persons from the 543 territorial constituencies of this country representing the people in Lok Sabha and 245 persons elected by 29 States and 7 Union Territories make laws, scrutinize orders of the executive and enforce accountability to protect the interests of the people. Each of these 788 voices is important. It is unfortunate that the parliamentary time devoted to legislation has been declining. With the heightened complexity of administration, legislation must be preceded by scrutiny and adequate discussion. Scrutiny in committees is no substitute to open discussion on the floor of the House. When the Parliament fails to discharge its law-making role or enacts laws without discussion, I feel it breaches the trust reposed in it by the people of this great country.

Through the instrument of Ordinances, the Executive has been vested with extraordinary powers to make laws to meet exigencies during a time when Parliament is not in session. However, such Ordinances have to be approved by Parliament within six weeks of the next session of the Parliament.

I am firm in the opinion that the Ordinance route should be used only in compelling circumstances and there should be no recourse to Ordinances on monetary matters. Ordinance route should not be taken on matters which are being considered or have been introduced in the House or a committee of the House. If a matter is deemed urgent, the concerned committee should be made aware of the situation and should be mandated to present its report within the stipulated time.

Hon’ble Members, it was in July 2012 that my membership in Lok Sabha came to an end when I was declare elected as the 13th President of the Republic on 22nd of that month. Even though thirty-seven years of my life in Parliament came to an end on that day but I still continued to have a tenacious link with this institution, in fact I became an integral part of it, as the President of Republic, as per the Constitution. Article 79 of the Indian Constitution says: “There shall be a Parliament for the Union which shall consist of the President and two Houses to be known respectively as the Council of States and the House of the People.” In these five years, my principal responsibility was to function as the guardian of the Constitution. As I had said on oath, I strived to preserve, protect and defend our Constitution, not just in word but also in spirit. In this task, I greatly benefitted from the advice and co-operation extended by Prime Minister Modi at every step. With passion and energy, he is driving transformational changes in the country. I will carry with me fond memories of our association and his warm and courteous behaviour.

As I retire from the Office of the President of the Republic, my association with the Parliament also comes to an end. I will no longer be a part of the Parliament of India. It will be with a tinge of sadness and a rainbow of memories that I will be leaving this magnificent building today.

Dear friends, with a sense of gratitude and a prayer in my heart, I take leave of you. I leave with a sense of fulfilment and happiness of having served the people of this great country through this institution- as their humble servant.

His term with his speech thus ended with Thank You and Jai Hind.

Across the electoral college, the Bharatiya Janata Party (BJP) has 31 per cent MPs and MLAs with criminal cases, Congress has 26 per cent, Trinamool Congress has 29 per cent, Communist Party of India (Marxist) […]