A journalist whose sole job is to bring the truth forward and play his role in strengthening democracy is unfortunately writing his own ordeal.

Kamran Yousuf, a freelance journalist who unveiled many facts related with the most dreaded riots in Delhi after Sikh Pogrom in 1984 post Indira assassination wrote his own ordeal on Twitter after he was brutally beaten by Kashmir Police and hospitalised. His sin was that he was doing his duty much like those who thrashed him.

Kamran posted a series of tweets about what he suffered so far as a Kashmiri journalist.

“I was 22 years old when I was falsely implicated in 2017 and jailed for six months in Tihar. I was the first Kashmiri journalist, who was booked under draconian UAPA. My only fault was that I was doing my job professionally,” he tweeted.

I was 22 years old when I was falsely implicated in 2017 and jailed for six months in Tihar. I was the first Kashmiri journalist, who was booked under draconian UAPA. My only fault was that I was doing my job professionally. pic.twitter.com/SwploOZyI0

“One of the charge against me was that I was visiting spots and taking pictures. My mother who has single handedly raised me since I was 2 years old and my other family members went through hell,” Kamran said in his tweet. 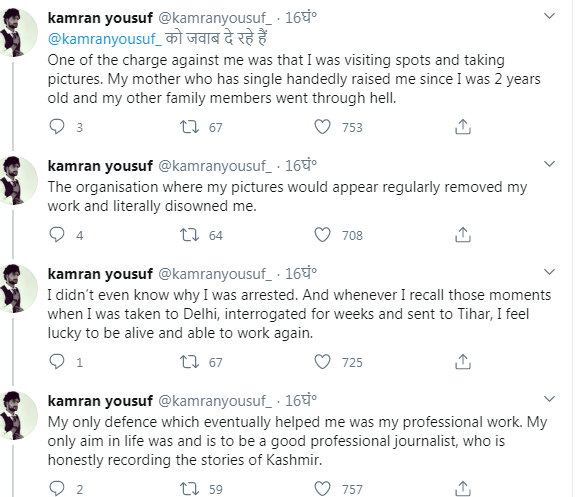 “The organisation where my pictures would appear regularly removed my work and literally disowned me. I didn’t even know why I was arrested. And whenever I recall those moments when I was taken to Delhi, interrogated for weeks and sent to Tihar, I feel lucky to be alive and able to work again. My only defence which eventually helped me was my professional work. My only aim in life was and is to be a good professional journalist, who is honestly recording the stories of Kashmir, The suffering that I see and record every day of my professional life has strengthened my resolve to work hard and do my job honestly. And this is why when I was released on bail two and half years ago, I returned back to my work immediately,” he added. 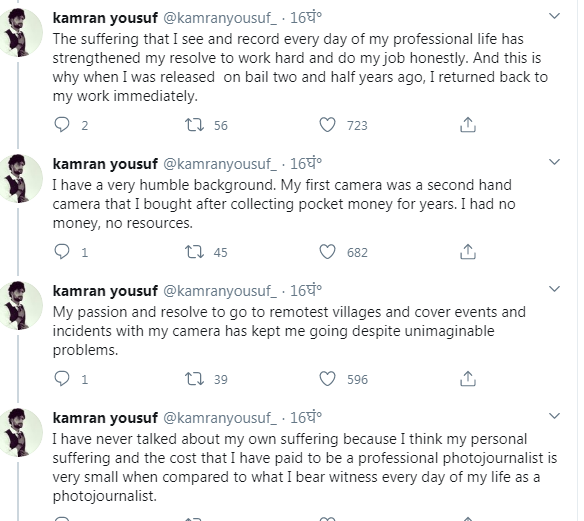 “I have a very humble background. My first camera was a second hand camera that I bought after collecting pocket money for years. I had no money, no resources. My passion and resolve to go to remotest villages and cover events and incidents with my camera has kept me going despite unimaginable problems. I have never talked about my own suffering because I think my personal suffering and the cost that I have paid to be a professional photojournalist is very small when compared to what I bear witness every day of my life as a photojournalist,” the journalist shared. 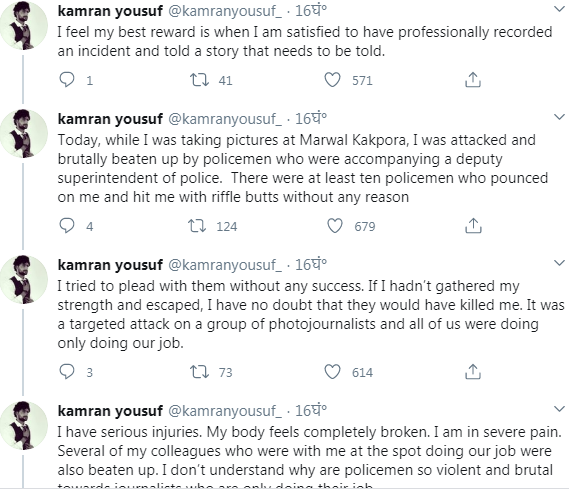 “I feel my best reward is when I am satisfied to have professionally recorded an incident and told a story that needs to be told,” Yousuf said.

“Today, while I was taking pictures at Marwal Kakpora, I was attacked and brutally beaten up by policemen who were accompanying a deputy superintendent of police. There were at least ten policemen who pounced on me and hit me with riffle butts without any reason,” he said about his recent torture by Kashmir Police.

“I tried to plead with them without any success. If I hadn’t gathered my strength and escaped, I have no doubt that they would have killed me. It was a targeted attack on a group of photojournalists and all of us were doing only doing our job. I have serious injuries. My body feels completely broken. I am in severe pain. Several of my colleagues who were with me at the spot doing our job were also beaten up. I don’t understand why are policemen so violent and brutal towards journalists who are only doing their job,” Yousuf said.

“Why has attacking journalists in Kashmir become a normal affair? How can a senior police officer ask the policemen accompanying him to target and ruthlessly beat up journalists who are busy doing their work? Why is there no accountability for this behaviour?” he asked. 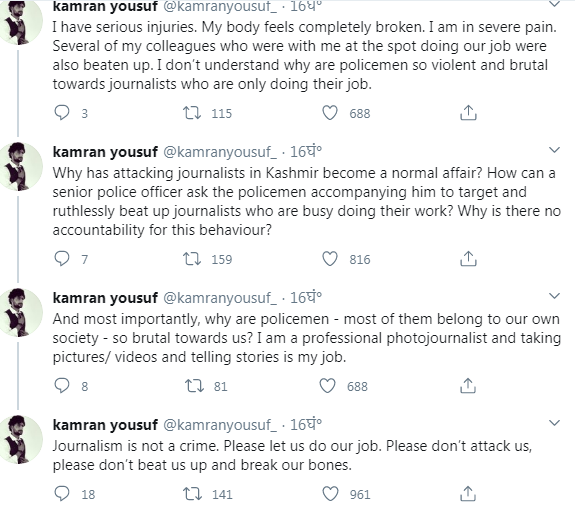 “And most importantly, why are policemen – most of them belong to our own society – so brutal towards us? I am a professional photojournalist and taking pictures/ videos and telling stories is my job,” he further asked.

“Journalism is not a crime. Please let us do our job. Please don’t attack us, please don’t beat us up and break our bones,” he concluded his tweets with this.

Who is Kamran Yousuf?

Kamran Yousuf is a freelance Kashmiri photojournalist. He was arrested by the National Investigation Agency on 5 September 2017 and spent about six months in Tihar Jail, New Delhi when he was released on bail on 14 March 2018. His detention was questioned at a national level by various bodies such as the Press Council of India, the Kashmir Editors Guild and Kashmir Young Journalists Association as well at an international level by Committee to Protect Journalists, the International Federation of Journalists and Amnesty International which all issued statements for his immediate release.

Kamran in again in news because he was brutally thrashed allegedly by Kashmiri police on Tuesday.