Karnataka Elections 2018 are over and fates of candidates are frozen in EVM machines. Political pundits have analysed exit poll results to predict winners in Karnataka. However, different minds have different finds. A very few say it is Congress who will get back to power.

On the eve of results The Morning chronicle has done a unique survey called “Post Poll Public Perception” or “ Survey P4” to predict the possible winners. Here are the figures of some of the exit polls and at the end of the report our survey results. 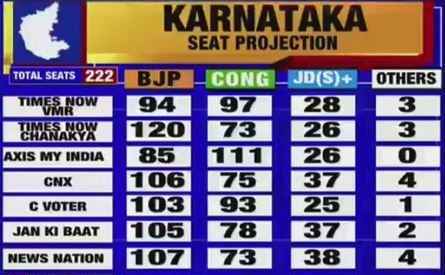 The Morning Chronicle after talking with political pundits, individual voters, party workers, local leaders in urban and rural areas across all the regions of the state, journalists, social activists and thinkers has arrived at this finding. Our “Survey P4“ goes in favour of Congress.

Among others Swaraj India may open an account in Karnataka.

New Delhi, May 9, 2018 (TMC Desk) The Congress on Wednesday moved the Election Commission (EC) alleging BJP hand in a Bengaluru incident where counterfoils and voter IDs were recovered from a flat in Rajarajeshwari Nagar […]

May 15, 2018 The TMC Desk Breaking News Comments Off on After roller-coaster ride, JD-S, Congress join hands to form government in Karnataka

Bengaluru (Karnataka), May 15, 2018 (TMC Desk) Major drama unfolded as the counting of votes progressed in Karnataka on Tuesday with the BJP, for most part of the day, seeming set to return to power until […]