Makhan  Lal Chaturvedi was a great Hindi poet. During the British Raj, he used the pen name “Ek Bhartiya Atma” (An Indian Soul) to write his poetry. “Pushp Ki Abhilasha” (A Flower’s Desire) is his most famous poem.

Every schoolboy from the Hindi belt knows the poem by heart. “Chaah nahi, mai  surbala ke gahno me goontha  jaaun!” A flower doesn’t want to be woven in a damsel’s jewelry. It wants to be thrown on the road , used by brave martyrs who offer their heads to the motherland! The poem still gives me goosebumps.

Chaturvedi was also a die-hard Congressman. A freedom fighter who was often put behind bars.  He always wore a Gandhi cap, made from khadi. His wrinkled face gave him grandpa looks. It was 1950s.  The Congress, after a landslide victory, was all set to form its Govt in Madhya Pradesh after the first assembly polls. The party authorized the high command (read Pandit Nehru) to nominate the CM. 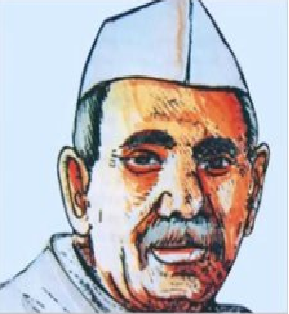 Sitting at the Teen Murti Bhawan, Panditji scratched his bald head and Makhan Lal Chaturvedi’s name popped up in his mind. Chaturvedi was a veteran Gandhian, revered in the party for his integrity and simplicity. He was a renowned poet to boot. Nehru rang Chaturvedi up and asked him to take over as the first Chief Minister of Madhya Pradesh. It was a singular honour. Any lesser mortal would have jumped in joy.

But Makhan Lal lost his cool: “Do you want to demote me, Panditji?” he said angrily “I am a national level poet. Known all over the country. And you are demoting me to a state level leader!”. Nehru was speechless.  He hang up the phone and then asked Pandit Ravi Shankar Shukla to become the Chief Minister.

Shukla of course jumped at the offer and was duly sworn in as the CM in Bhopal. Chaturvedi, a frail and old Gandhian, lived at his simple abode writing poetry, having turned down the CM crown offered by no less a leader than Nehru himself!

Nowadays, I find netas shedding blood to become mukhiyas and sarpanches! Panchayat polls witness murder and mayhem. And a “sadak chhap gunda” Dhongi Adityanath becomes the Chief Minister of UP to “serve” people.

Men of character like Makhan Lal Chaturvedi are nowhere seen. What a fall , my countrymen!

Lessons from Maharashtra: Mafiagiri has limitations

November 27, 2019 The TMC Desk Left is Right Comments Off on Lessons from Maharashtra: Mafiagiri has limitations

The political “mafiagiri” unleashed by Narendra Modi and Amit Shah has met its Waterloo in Maharashtra.  The curtain has come down on the Devendra Fadnavis Govt. “Bade  beaabroo  hoke nikle, tere kooche se“, Fadnavis announced […]

Chidambaram Bureau of Investigation? Why CBI is Obsessed with Chidambaram

August 22, 2019 The TMC Desk Amitabh Kumar Das Comments Off on Chidambaram Bureau of Investigation? Why CBI is Obsessed with Chidambaram

I hold no brief for Chidambaram. If he has something wrong, he must be brought to book. But the manner in which the CBI is dealing with P Chidambaram smacks of political vendetta and witch-hunting. […]

Chandrayaan Fails, But Onion Prices Land on the Moon

September 26, 2019 The TMC Desk Left is Right Comments Off on Chandrayaan Fails, But Onion Prices Land on the Moon

Sometimes back a pall of gloom descended on Mera Bharat Mahan. ISRO lost its contact with Chandrayaan’s Vikram lander. The lander was supposed to land on the moon, planet earth’s only satellite. But Vikram, perhaps […]