A Delhi court has ordered enquiry into the burn-stamping of a Muslim under-trial with ॐ mark allegedly by a jail superintendent inside the Tihar Central Jail in the national capital.

Journalist Utkarsh Anand, who is legal editor of CNNnews18, shared the photo of the victim and a copy of the court order on his Twitter handle Friday evening.

The court order passed on April 17 mentions details of the incident.

A #Delhi court has called for an inquiry & explanation from the DGP, Prison after a #Muslim undertrial is burn-stamped with ॐ, allegedly by a Tihar jail superintendent. pic.twitter.com/eXiVPWMPbS

“The accused has been subjected to cruelty and inhuman treatment in jail by the jail superintendent Rajesh Chauhan. It is alleged that on 12.04.2019, Jail Superintendent had burn imprinted symbol ‘Om’ on the back of accused and has also deprived him from food for two days…” reads the court order. 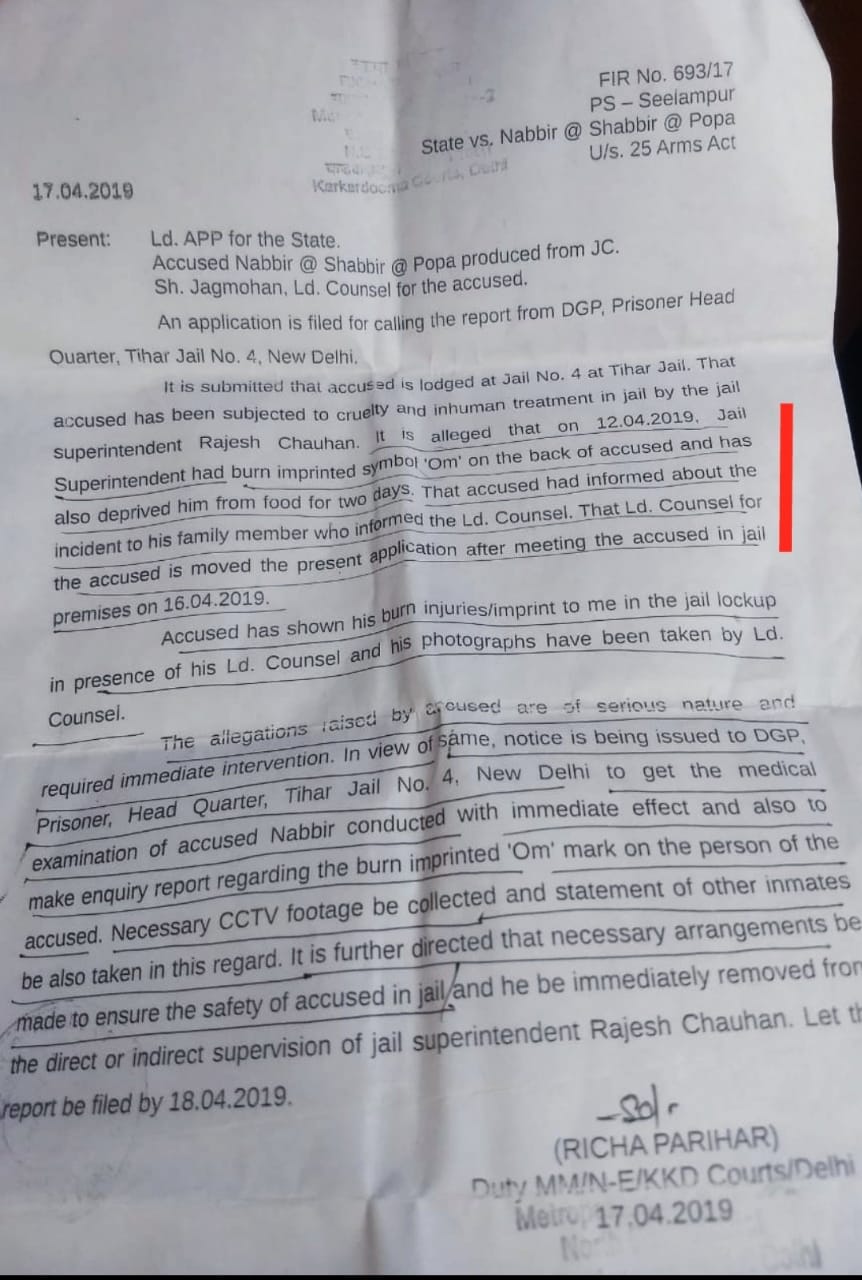 The under-trial identified as Nabbir @ Shabbir had informed about the incident to his family member who informed his lawyer. The lawyer filed the application after meeting his client in jail premises on April 16.

“The allegations raised by accused are of serious nature and required immediate intervention. In view of same, notice is being issued to DGP, Prisoner, Head Quarter, Tihar Jail No. 4, New Delhi to get the medical examination of accused Nabbir conducted with immediate effect and also to make enquiry report regarding the burn imprinted ‘Om’ mark on the person of the accused. Necessary CCTV footage be collected and statement of other inmates be also taken in this regard,” the court ordered.

“It is further directed that necessary arrangements be made to ensure the safety of accused in jail and he be immediately removed from the direct or indirect supervision of jail superintendent Rajesh Chauhan. Let the report be filed by 18.04.2019,” said the court.

It is not known if the DGP, Tihar filed his report on April 18 and what action was taken against the guilty thereafter.