AIMPB welcomed the Apex court’s judgement on Instant Triple Talaq. The board issued a press statement and said that this is a huge victory for them as the judgement vindicates their stand and ensures the fundamental right of ctizens of this country to freely profess and practice their religious faith/beliefs. Read the full text of its press statement:

We, as a representative body, welcome the Judgement of the Hon’ble Supreme Court since it accords protection to Muslim Personal Law and says that personal laws cannot be tested by courts on the grounds of violation of fundamental rights. The majority (comprising Justice Kehar and Justice Abdul Nazeer with Justice Kurian Joseph agreeing) has accorded personal laws the status of a fundamental right being protected under the right to practice religion contained in Article 25.”

This is a huge victory for us as the judgement vindicates our stand and ensures the fundamental right of ctizens of this country to freely profess and practice their religious faith/beliefs. This judgement shall ensure non-interference by the courts in matters of practices emanating from religious texts and belief systems of different communities. Ultimately, the judgement has upheld the essence of fundamental rights ensured to the citizens of this country.

Insofar as the practice of talaq-e-biddat is concerned, we had already submitted to the court that the practice of three pronouncements of Talaq in one sitting, though it has basis in religious texts and belief thereon, is not the best way of pronouncing Talaq and various surveys suggest that it is seldom resorted to. For a long time, we ourselves have taken steps to discourage this practice through community reform programmes and Model Form of Nikahnama issued by the Board. In the addifavit filed on 22.05.2017, we had already informed the Court about our stand for issuing instructions to the Maulvis/Qazis to incorporate conditions in the Nikahnama to provide for the option to the marrying parties to exclude the option of pronouncing three times Talaq in one sitting, in case of divorce taking place. We are aware that many Muslims believe talaq-e-biddat meaning triple talaq given in one sitting, has basis in religious belief/practice. However, while we accept the judgement, we will examine the issues of its implementation and will work to resolve the same. 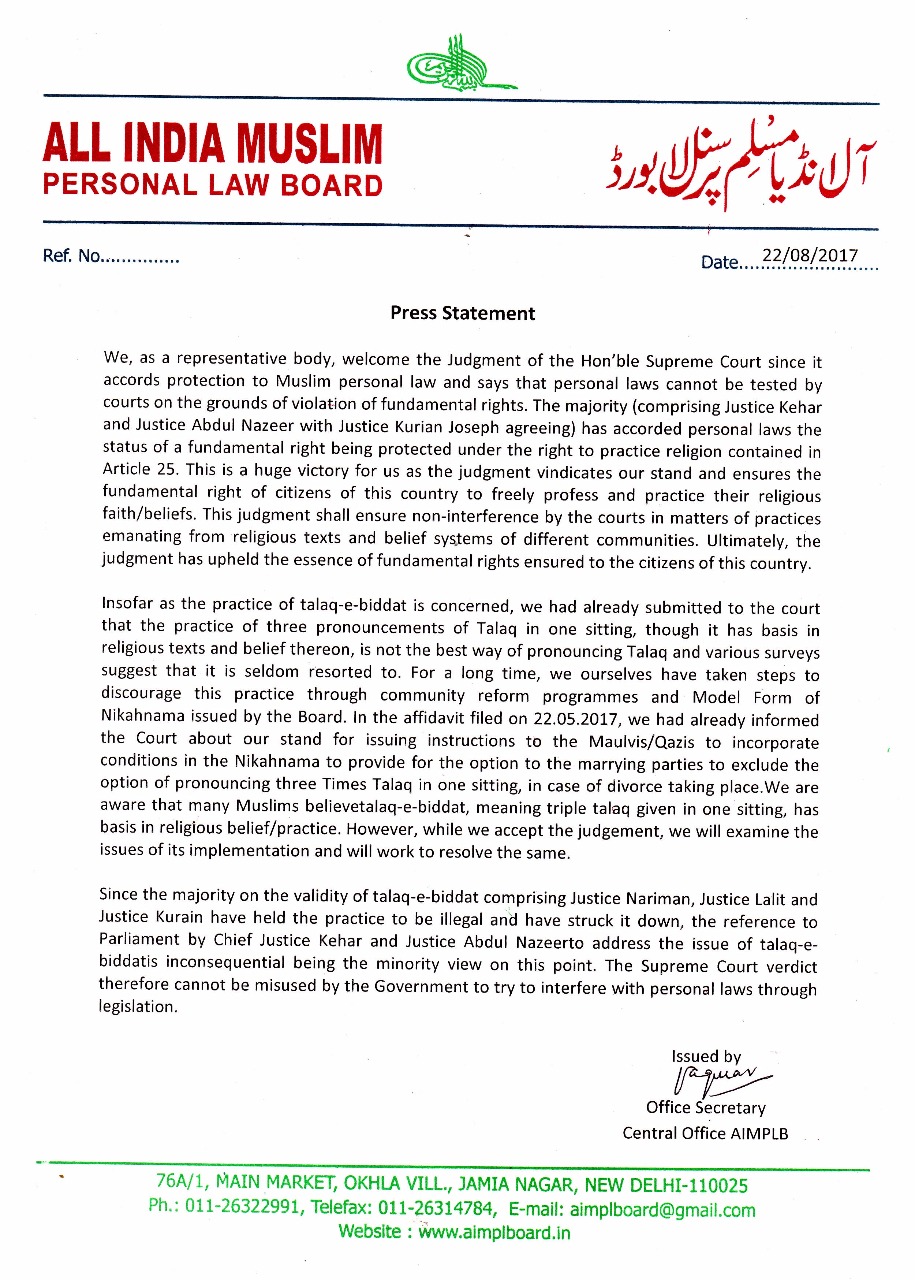 Since the majority on the validity of talaq-e-biddat comprising Justice Nariman, Justice Lalit and Justice Kurian have held the practice to be illegal and have struck it down, the reference to Parliament by Chief Justice Kehar and Justice Abdul Nazeer to address the issue of talaq-e-biddatis inconsequential being the minority view on this point. The Supreme Court verdict therefore cannot be misused by the Government to try to interfere with personal laws through legislation.

Khari Khoti of Markandey Katju to the Muslim Community

June 27, 2019 The TMC Desk India Comments Off on Khari Khoti of Markandey Katju to the Muslim Community

Former Judge of Supreme Court, Markandey Katju, known for his proximity with the Muslim community and liberal forces in India has suggested some ways to emancipation for one of the most backward communities of India […]

If law against dowry could not stop bride-burning will a law against instant Triple Talaq stop it?

-Soroor Ahmed   Corruptissima re publica plurimae leges. (The more numerous the laws, the more corrupt the government), said ancient Roman lawyer, Tacitus. One may agree or disagree with what he said 2,000 years ago […]