To take another step in the matter of detoxification (What a lot of house cleaning to do, before you can begin setting it in order!), we address a critical organ, the liver.

As chief biochemical synthesizing and detoxifying organ, the liver bears the brunt of all your indulgences in alcohol, drugs, fatty food, preservative and synthetic substances-laden processed foods, as well as compulsions like prescription drugs, all of which place a considerable burden on your liver.When the broken down food is carried by your bloodstream to the liver, it sorts out the nutrients needed by the body and converts them into usable units, and storing some for later use. The waste and harmful matter it neutralizes and sends to be released from the body. 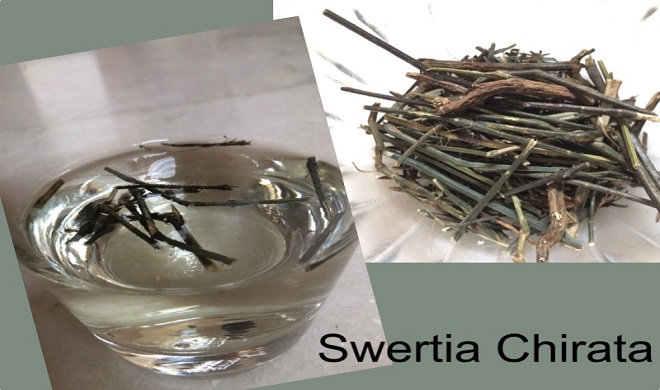 To rescue the poor liver from untold slavery, allow me to introduce you to its medicinal plant fairy godmothers–Swertiachirata and Phyllanthus niruri. In Hindustani swertia chirata is called chirayita, and chiretta in Sanskrit, a rare instance in which the name sounds alike in one of the oldest languages, a modern one, and its botanical name. It is a Himalayan plant, and by that geographical location alone, vulnerable. Phyllanthus niruri is called bhuiamla in Hindi, and in Tamil, keeranelli, and is found all over the plains, growing like a weed (and often treated as one) in the hot and humid seasons, and dying back in cold temperatures.

Both are bitter. I find the bhuiamla that grows in southern India several shades more bitter than the one that grows in the north. If you have ever had the digestive secretion of the liver, bile, rise up to your mouth, you know it is bitter. It takes a thief to catch a thief, at times, and these bitter herbs are nothing if not hepatoprotective – protective of the liver.

The twiggy stems of chirayita is what you will get as the operative from the native herbalists (called pansari in Northern India), or the modern health stores. In Ayurveda, chirayita is oft recommended for malarial fevers. Tribes of east and central India use it as a preventive for mosquito-borne diseases. The urbanites need to get smart and learn from them in employing it at the turn of seasons to protect themselves from the frequent epidemics of malaria, dengue and chikungunya.

The way to use chirayita is to take a large pinch of the twigs, dunk them in a quarter cup of room temperature clean water, letting it rest overnight. Drink the water first thing in the morning on an empty stomach, and re-soak the same twigs in another quarter cup of water. Drink this in the evening at least an hour before your meal. Before you do, remember to soak another pinch of twigs for the morning. As I said, it’s bitter. Most people are okay with it, but if you are in the minority that gags at that, take it with juice or honey, or whatever works for you.

As a preventive, a week’s course is good enough. As a curative for liver disease of any kind (including pre-cancerous lesions), fevers, blood infections, diabetes, etc., taking it in courses of two weeks, giving it a gap and resuming till the symptoms disappear can be a workable approach for most. Despite Ayurvedic proponents saying that it works to balance all three humours (doshas), people who are emaciated, are dehydrated, or have other ‘vata’ symptoms, should not take it very long without the supervision of a professional vaid or hakim. Chirayita also alleviates constipation, anaemia, worms, heavy bleeding in menstruation, inflammatory conditions of the joints and lungs, and persistent skin conditions (the blood purifying part helps here … anyone remember a Unani product called ‘Safi’ for pimples and acne?).

The most remarkable and speedy action of chirayita that I have seen is for people with liver issues, nausea and loss of appetite.  In one extremely debilitated case of jaundice, the bilirubin count was consistently hitting the ceiling, and days of hospitalization and medication unable to do anything for the patient. She was throwing up even a sip of water. After the first dose of chirayita, she began drinking water without vomiting, and after the third, asked for food for the first time in fifteen days.

A patient with severe cirrhosis of the liver, after months of hospitalization, in a completely wasted condition, and due in a few weeks for yet another surgery for a persistent liver lesion, was finally persuaded to take chirayita. In a fortnight, his doctor asked for a second scan when his liver showed no sign of the lesion. The surgery, of course, never happened. The grateful patient distributed chirayita to every liver disease patient in that hospital for a few months after his recovery, and told us of many that benefitted as much as he did.

It would add to their survival and health skills if we made identification and use of certain essential plants part of the school curriculum, so efficient are they in ensuring health and well-being. Bhui amla often grows in damp and warm areas, like rice field-edges, flower and vegetable patches, drain margins, etc., and is regularly yanked out as a weed in well-kept gardens. You’ll probably find it growing in your backyard, the park or any open unused space that is being watered, but harvest it only from those areas that are free of chemical spraying and fertilizers. The plant grows to a foot or two at the most, and the whole plant, along with the root, is edible.

It is fast acting when taken for jaundice. It is best had first thing in the morning on an empty stomach. About four-six inches of the plant along with the root is chewed raw, and washed down with a light, salted buttermilk or water. If it’s a large plant, you can forego the root and settle for the leaves and stem. Usually by the third day, symptoms of jaundice go down significantly, and the patient begins regaining appetite. Like Chirayita, it is hepatoprotective and also used for other conditions of the liver like cirrhosis, fatty liver, and other hepatitic infections.

Bhui amla is also used for kidney stones and in kidney disease, by itself and in combination with other herbs. Further it is used for lowering blood pressure, for diabetes, as an appetiser, for malarial fever, leucorrhoea (white discharge), menorrhagia (excessive menstrual bleeding) and as a simple detox. A cold infusion or light decoction as well as chewing it raw are the preferred ways of taking this plant’s healing properties in.

And always do take it with the knowledge that it will cure you, because the body always follows the mind. Someone asked me, “Then why do medicines and therapies work on our bodies, even on children and animals who have no preconceived notion about them”?

They work because we have a lot of unconscious agreements and assumptions, collective and individual, which work to our advantage, like gravity, the human form, bodily functions, circadian rhythm, visible spectrum of light, and so forth. We also agree (at least to a large extent) on what makes us better. But that’s a discussion for another day.

So go right ahead and place your bet on these two bitters.

Disclaimer: Everything related to health in this column is for information purposes only. Readers are expected to exercise their own good sense in following any of them, and consult a professional therapist or doctor for conditions that warrant doing so. The author and The Morning Chronicle bear no responsibility for any outcomes from following anything described herein.

Liked it? Take a second to support R K Chandrika on Patreon!

Poison and Medicine in your Food – II Thorn in your Flour

-R K Chandrika By the time you retire for the night, it would be surprising if you’ve not had something from this list: roti, naan, bread, cake, biscuit, pasta, pizza, noodles, sweet treats, rusk, mathri, […]

We discussed fasting last time for healing yourself in very noticeable ways through detoxing at multiple levels. Physical exercise is another manner of detoxing, while building up flexibility, energy, and strength. Further, in oriental martial […]