There are several instances of police high handedness amid lockdown in Bihar. A few days back, an entire village in Aurangabad district was literally ransacked by the policemen of four stations together like criminals out of retaliation. Actually, before that, a team of health workers and policemen was thrashed by the villagers when they heard they were taking a wrong man to quarantine. Village sources said that they explained to the police and healthcare team that the person they were dragging was different but they abused the villagers and scuffle happened.

Another shocking story of bullyism of police men was from the capital city itself. Jakkanpur Police station team led by its SHO thrashed a traffic constable who was going to take his mother’s medicine from a nearby medicine shop. In spite of his showing identity, the police team could not stop and consequently the police constable had to be hospitalsed himself instead of taking medicine for his ailing mother.

There are many instances where police teams and healthcare officials were also attacked. Local sources say that the teams (healthcare and police) actually fail to convice the illiterate villagers that what they are doing is for their good and out of fear they are attacked. Their arrogance of working in this time of Corona crisis also comes between the public and the police especially when the public is from the weaker section.

Another different story of lawlessness and violation of lockdown coming to the fore is of a BJP MLA from Nawada Anil Singh who had an epass issued to get his son back from Kota where he was supposed to be stranded. Surprisingly, there are thousands of kids of ordinary people stranded over there due to random announcement of lockdown and the state is in no mood to bring them back. 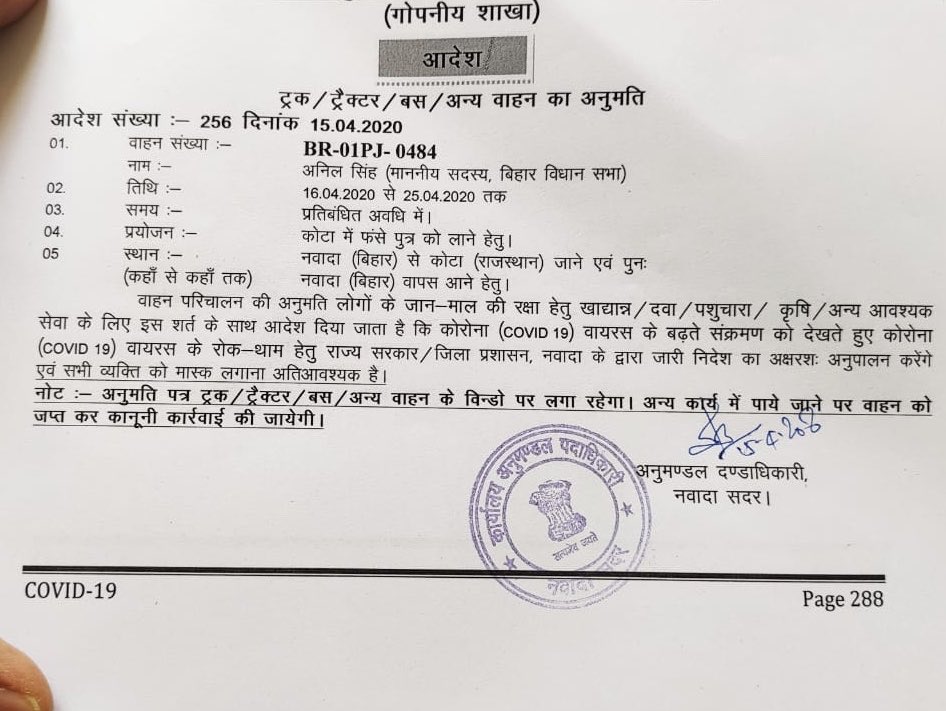 Interestingly, the movement pass to the BJP MLA was issued days after Bihar government wrote to home ministry that a group of 300 students be stopped who had their passes issued by the Kota administration and were ferried to Patna in taxis.

“This will open up a Pandora’s box. If you allow students, on what grounds can you stop migrant labourers who are also stuck,” the letter said, asking that special permits granted by the Rajasthan government be stopped.

Prashant Kishor, Nitish’s past political strategist criticised Nitish Government on adopting two different standards. Appeal to help children of Bihar trapped in Kota. Nitish Kumar had rejected… now his government has given special permission to a BJP MLA to bring his son from Kota. Nitishji, what does your dignity say now?” Kishor, who was Nitish Kumar’s poll strategist during last assembly and parliamentary elections tweeted.

What is more interesting is pointed out by Amitabh Kumar Das, a retired IPS officer.

“Was there a sex change during MLA’s journey from Rajasthan to Bihar,” former cop pointed out. “When the BJP MLA had taken permission to get his son back how come he came back with his daughter,” he pointed out sharing a news snippet from Times of India published today.

When tried to contact TOI to ensure if there was a clerical mistake by the press, there was no response. BJP MLA was also out of reach for his clarification.

Anyway, if it is true, BJP MLA not only flaunted guidelines by the central government and those having propagated by PM Narendra Modi himself on television live, he also falsified to get the pass issued.

When Dr Manmohan Singh was the Prime Minister, Amit Shah went to jail in connection with fake encounters. Now, Amit Shah is the Home Minister, the MHA (Ministry of Home Affairs) has hit back. Manmohan […]

“Buri nazar wale, tera muh kala” the warning to evil eyes are boldly painted on trucks plying on Indian highways. Truck drivers and their “khalaasis” are forever concerned about evil eyes as they crisscross India’s […]