With an alliance of 20 parties in different states, BJP succeeded to win a thumping majority. Not only BJP did well, its allies except a few states also did fair enough. In Bihar, its both allies JD (U) and LJP are leading on 16 and 6 respectively. The only seat from Kishanganj and lonely Muslim candidate from NDA lost to Dr. Jawed from Indian National Congress.

In Assam, the saffron party had an alliance with two parties – Asom Gana Parishad and Bodoland People’s Front on 3 and 1 seats respectively. However, its both allies could not open an account here. BJP is expected to win 9 seats here. It is leading on 7 and has won 2 seats.

In Jharkhand, All Jharkhand Students Union had an alliance with BJP on 1 seat and is leading here. BJP in Jharkhand is expected on 11 seats, 7 won and on 4 seats in lead.

In Karnataka, BJP had supported an independent candidate Sumalatha Ambaressh from Mandya and is expected to win. BJP is expected to win on 25 seats in this southern state. Congress with JD (S) failed to perform here and won only two seats 1 of each.

In Kerala, BJP had pre poll alliance with two parties – Bharath Dharma Jana Sena and Kerala Congress (Thomas) however both its allies lost. 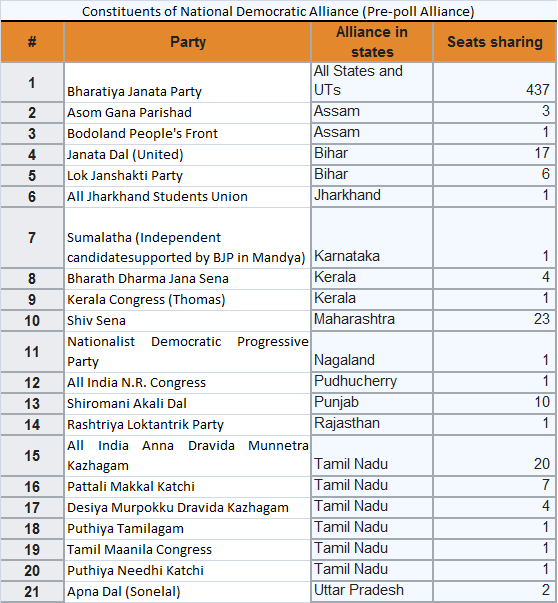 In Nagaland, out of 1 seat, the seat goes to BJP’s ally Nationalist Democratic Progressive Party. It is leading.

In Puducherry, the BJP had made an allaince with All India N.R. Congress which is trailing here.

The only BJP’s ally All India Anna Dravida Munnetra Kazhagam is leading on 1. Its other four allies have badly been defeated including BJP.

In spite of Sabarimala Temple issue and tireless efforts with all its star campaigners BJP could not open its account in Kerala. Both its allies Bharath Dharma Jana Sena and Kerala Congress (Thomas) also lost. Indian National Congress did fair enough here winning 15 (Leading on 01 included)

In Puducherry, the BJP had made an alliance with All India N.R. Congress which is trailing and expected to lose as the margin is very wide. Ve. VAITHILINGAM of Indian Natoinal Congress has secured 435124 votes compared to BJP’s partner candidate Dr. NARAYANASAMY KESAVAN 242168 votes so far. Counting is on.

The only BJP’s ally All India Anna Dravida Munnetra Kazhagam is leading on 1. Its other four allies have badlu been defeated. In Tamil Nadu, BJP lost all 5 seats.