The CAG report on catering services of Indian Railways tabled in Parliament on Friday is alarming. The assessment that the food served at trains is ‘unfit for human consumption’ comes as a bleak commentary on the services of ‘world’s eighth biggest employer’.

Railway’s catering has never been about ‘choice’. People under compulsion and as a last resort generally opt for it. Both in taste and quality it is categorised as below par. The tea served in trains has especially made a bad name due to its substandard quality.

Those who preferred the railway’s foods on local vendor  that at least there are some checks and balances in place at railway catering are enraged. They are feeling cheated for the every extra penny they have paid considering their health. 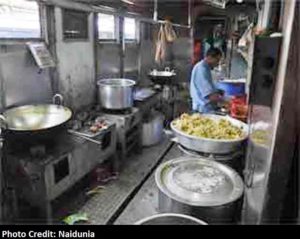 The comptroller and Auditor general of India report points out, “During the inspection at selected 74 stations and 80 trains, audit noticed that Cleanliness and hygiene were not being maintained at catering units at stations and in trains. Unpurified water straight from tap was used in preparation of beverages, waste bins were not found covered, not emptied regularly and not washed, food stuff were not covered to protect them from flies, insects and dust, rats and cockroaches were found in trains etc.’’

What has come to as most shocking is that even packaged foods and beverages sold at station are not safe.  Trains often get delayed for hours and many passengers found themselves compelled to purchase either from catering or packaged snacks and beverages from station . What they don’t know is that they are ‘unknowingly’ faced with a dilemma. Should they care for health or the immediate need? They must choose one.

Unaware of the consequence, they pick whatever they want. The challenge becomes more complex in the case of younger generation, since for them, carrying homemade food while travelling is out of fashion, if not inferior.

Notwithstanding the aspiration of ‘Bullet Train’, miserable stories of recurring accidents, lack of cleanliness and hygiene and frequent delays have already tarnished the image of India Railways. However, the CAG report is essentially an eye opener i.e., the priority must be given to strengthen the basic services before opting for technological advancement.

Charisma of Prabhu in Railways exposed in the CAG audit report

An audit report of the Comptroller and Auditor General of India on Catering Services in Indian Railways has exposed Prabhu charisma in railways. In a 301 pages audit report, which was carried out to assess […]

In an open letter to the Comptroller and Auditor General (CAG) of India, as many as 60 former civil servants have questioned the unusual delay in the national auditor coming out with reports on demonetisation […]