Mumbai (Maharashtra), March 12, 2018 (TMC Desk) A protest march by 50,000 farmers against the failure of the BJP-led government to address agrarian distress entered Mumbai on Saturday.

The march, led by All India Kisan Sabha (AIKS) — a peasants front of the Communist Party of India (Marxist), was launched from Nashik on Tuesday.

The farmers will stage a protest outside the legislative assembly here on March 12, demanding fair remuneration and loan waiver.

Famers protest have been widely supported and hailed by Bollywood Celebrities and Common Man. Twitter campaign has also been initiated #भूखा_किसान_महंगा_विमान (#Bhookha_Kisan_Mahnge_Wiman) where twitterati came out in full support of their demands.

Moreover, Mumbaikers rising above their religion came out with food and water to relieve the marchers who have been on a trudge since Tuesday from Nasik.

“Today early morning, large groups of civilians waiting at roads greeted the #FarmersMarchToMumbai with water, dates & biscuits, to which peasants reciprocated with loud slogans of Lal Salaam,” tweeted AIKS on Monday while posting a photo of some Muslim volunteers.

In another tweet, AIKS tweeted, “#KisanLongMarch gets a warm welcome from Mumbai citizens.” In this tweet, a photograph of some Mumbaikers distributing biscuit packets is also attached.

Sikh Community also came out to help farmers on Sunday. “Sikh community in Mumbai distributes food to farmers participating in the march. #KisanLongMarch,” AIKS tweeted with a photograph. 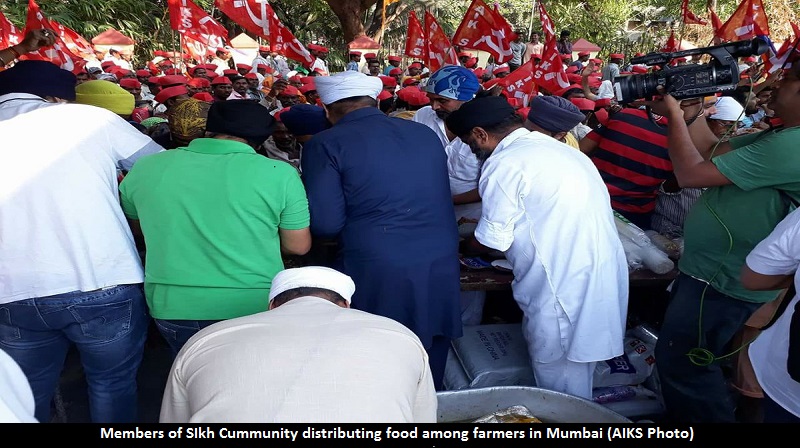 Mumbai Dabbawallas have also been a part of helping farmers with whatever possible.

Mumbai (Maharashtra), March 12, 2018 (TMC Desk) The gruelling 200-km, six-day long ‘Long March’ by over 35,000 farmers ended on a positive note, with the Maharashtra government conceding most demands on Monday evening. The decision was […]