Lok Sabha elections will begin on April 11 and will be held in seven phases, Chief Election Commissioner Sunil Arora announced on Sunday. While addressing the media at Vigyan Bhavan in New Delhi, the CEC announced the date for various phases and said counting of votes will take place on May 23. The Model Code of Conduct will also come into effect from today, he added. 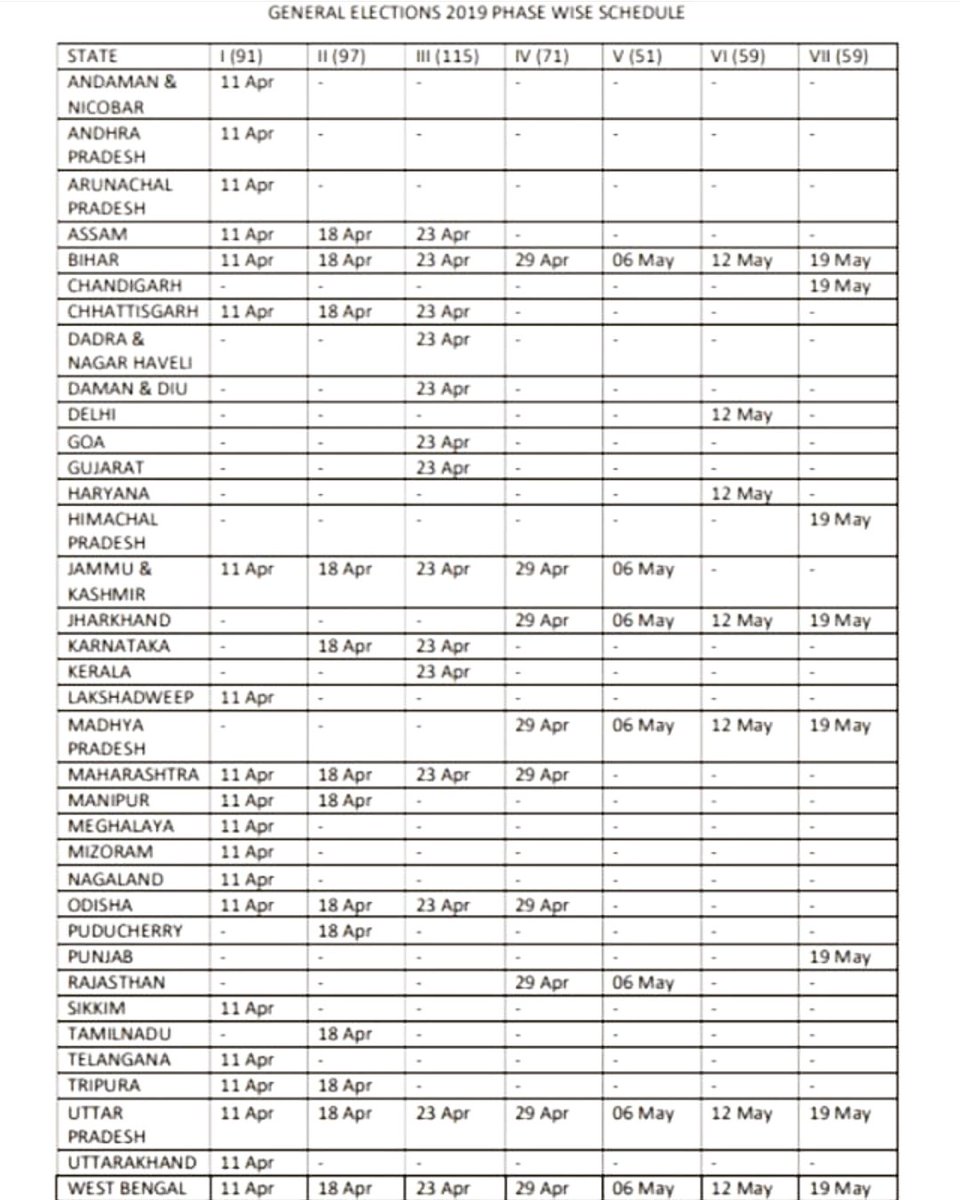 Elections in Bihar, Uttar Pradesh and West Bengal will be held in seven phases.

What is the Model Code of Conduct?

The Election Commission’s Model Code of Conduct is a set of guidelines issued to regulate political parties and candidates prior to elections. The rules range from issues related to respect to speeches, polling day, polling booths, portfolios, content of election manifestos, processions and general conduct, so that free and fair elections are conducted.

What restrictions does the Model Code of Conduct impose?

As soon as the code kicks in, the party in power — whether at the Centre or in the States — should ensure that it does not use its official position for campaigning. Hence, no policy, project or scheme can be announced that can influence the voting behaviour. The party must also avoid advertising at the cost of the public exchequer or using official mass media for publicity on achievements to improve chances of victory in the elections.

The code also states that the ministers must not combine official visits with election work or use official machinery for the same. The ruling party also cannot use government transport or machinery for campaigning. It should also ensure that public places such as maidans etc., for holding election meetings, and facilities like the use of helipads are provided to the opposition parties on the same terms and conditions on which they are used by the party in power. The issue of advertisement at the cost of public exchequer in the newspapers and other media is also considered an offence. The ruling government cannot make any ad-hoc appointments in Government, Public Undertakings etc. which may influence the voters.

Political parties or candidates can be criticised based only on their work record and no caste and communal sentiments can be used to lure voters. Mosques, Churches, Temples or any other places of worship should not be used for election propaganda. Bribing, intimidating or impersonation of voters is also barred. Holding public meetings during the 48-hour period before the hour fixed for the closing of the poll is also prohibited. The 48-hour period is known as “election silence”. The idea is to allow a voter a campaign-free environment to reflect on events before casting her vote.

The ECI can issue a notice to a politician or a party for alleged breach of the MCC either on its own or on the basis of a complaint by another party or individual. Once a notice is issued, the person or party must reply in writing — either accepting fault and tendering an unconditional apology or rebutting the allegation. In the latter case, if the person or party is found guilty subsequently, he/it can attract a written censure from the ECI — something that many see as a mere slap on the wrist.

Is Model Code Of Conduct only Moral or Legally Binding?

As if Samajwadi turned Rightwinger Jaya Prada has been playing the victim card since BJP chose her to fight Samajawadi stalwart Azam Khan from Rampur. In a recent controversy, Jaya Prada has accused Azam Khan […]

Will the United Opposition Really Work Well in 2019 Parliamentary Election?

June 30, 2018 The TMC Desk Opinion Comments Off on Will the United Opposition Really Work Well in 2019 Parliamentary Election?

-Dr. Mohammad Aleem As the forthcoming election of 2019 coming close day by day, the speculation about its outcome is getting ripe also. There are different views and varied opinions. Some say that it will […]