Saffron Leader Union Minister Giriraj Singh, a motormouth, known for his statements Yogi and Sakshi style in Bihar is said to have sidelined by his party, the BJP, as the national leadership has reportedly agreed to give the Nawada parliamentary seat in Bihar that he represents to the LJP, an NDA ally.

Though formal seat allocations and the names of NDA candidates are yet to be made public, LJP leader confirmed that his party would contest from Nawada and give up the Munger seat it holds for Rajiv Ranjan alias Lalan Singh.

“It was decided at a meeting of (BJP president) Amit Shah, (Bihar Chief Minister) Nitish Kumar and (LJP chief and Union Minister) Ram Vilas Paswan that the LJP will be given the Nawada seat in lieu of leaving the Munger seat for ally JD-U. LJP has made up its mind to contest from Nawada,” Pashupati Kumar Paras, state president of LJP said.

Sources said that Giriraj Singh was offered the Begusarai seat, from where former JNU students’ union president Kanhaiya Kumar is likely to contest as a CPI candidate supported by the opposition Grand Alliance (RJD, Congress, RLSP and HAM). However, he denied tocontest from this seat likely fearing his defeat.

Giriraj Singh, known for his controversial statements, has been keeping away from the media since last Sunday when he failed to attend Prime Minister Narendra Modi’s Sankalp rally pretending health reasons.

The Opposition RJD, Congress and RLSP taunted Giriraj Singh as he had stated that it would be clear from those who didn’t attend Modi’s March 3 rally in Patna as to who supported Pakistan, when he himself failed to attend the event.

Sources in the NDA said the LJP’s Veena Devi, wife of former MP Surajbhan Singh, a criminal-turned-politician, would vacate her Munger seat and contest from Nawada. Like Giriraj, She is also a Bhumihar.

Interestingly, JD-U president Nitish Kumar has convinced the BJP to give his party the Munger seat as his close friend and senior party leader Lalan Singh, a Bihar minister, is keen to contest from there.

Lalan Singh, a Bhumihar, had won from Munger in 2009 seat but lost in 2014 when the JD-U was not part of the NDA and contested the polls alone.

In  November  2014, a  senior  IPS officer Amitabh Kumar Das accused Giriraj of having close links with the Ranveer Sena, an outlawed  private  militia of  landlords. Das, known as a no- nonsense police officer, was the SP of the Bihar Human Rights Commission at the time. He had sent his report to the Special Branch, the Bihar Police ‘s intelligence wing and requested a thorough probe by the Intelligence  Bureau, a  Govt of India agency. The letter-bomb had left the Narendra Modi Government  red – faced and the Opposition demanded  Giriraj’s scalp. 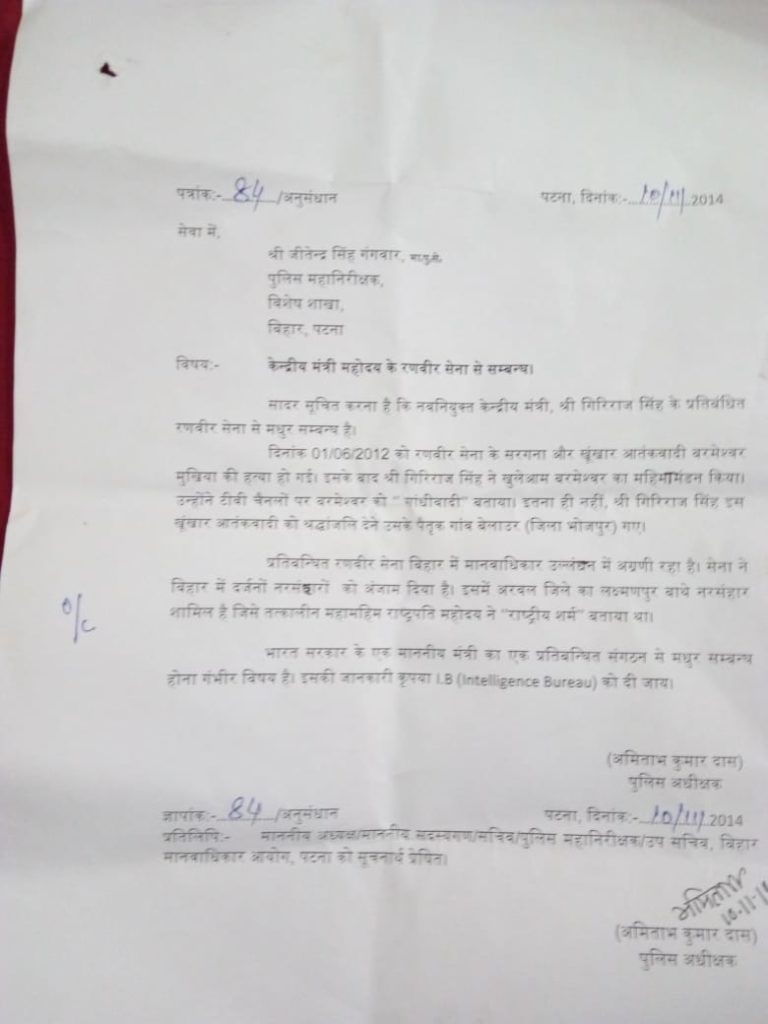 Das was soon given marching  orders by the Jitanram Manjhi  Govt which had come very close to the BJP by this time. Now, 2019 Lok Sabha polls are round the corner and the ruling BJP, fighting anti – incumbency, can’t afford to antagonise the  Dalit vote – bank. The party has decided to deny the motormouth Union Minister Lok Sabha ticket. Giriraj Singh is sulking and stayed away from Narendra Modi’s Sankalp  Rally in Patna.

Interestingly, Giriraj, prior to the rally, was shouting from rooftops that those keeping away from the Sankalp Rally would be seen as anti-national ! When TMC contacted  Amitabh Kumar Das amidst reports of the ticket denial to Giriraj, he refused to comment on this political issue. But Das told TMC that  Giriraj Singh had been hands in glove with the Ranveer  Sena  and again called for an  IB probe into Giriraj Singh ‘s Ranveer Sena links.

According to the seat-sharing formula, the BJP and the JD-U will contest 17 seats each, while the remaining six seats will go to the Ram Vilas Paswan-led LJP.

May 2, 2019 The TMC Desk Quick News Comments Off on Quick News: Dr. Kafeel demands CBI inquiry, Masood Azhar a global terrorist, Clean chit to Modi and Notice to Gandhi by EC and more

BSP chief Mayawati on Sunday said the BJP will be going out of power unless it tampered with the EVMs, criticising the party for its “casteist” and “manuwadi” politics. “Jumlas will not be able to save […]

–Amitabh Kumar Das When I got a phone call from Mr Inaam Khan inviting me to an award ceremony at Rahbar Coaching, I was thrilled. I always enjoy mingling with young boys and girls. They […]