Former prime minister Manmohan Singh on Sunday said India is headed for an economic slowdown and accused the Modi government of leaving the economy in dire straits due to its “lack of economic vision”.

Citing the latest economic growth figures to suggest an impending slowdown, the senior Congress leader also said the Indian economy is “over-regulated” and the government controls and interferences are aplenty with even regulators having “morphed into controllers”. 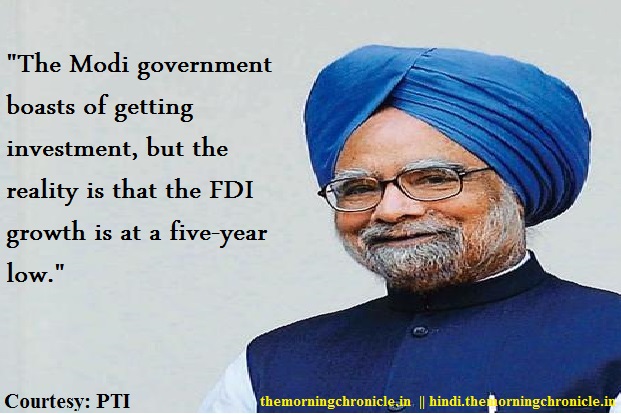 He also rued the “growing interference” of courts in the economic policies, and said the Congress would have handled the economy differently.

In an interview to PTI, the two-time prime minister, who is credited with spearheading India’s economic reform process, alleged that the lack of any vision or understanding of the country’s dynamics of economy by the Narendra Modi-led government has led to “disruptive” decisions like demonetisation.

“Finance Ministry’s latest monthly report now reflects that the country is headed for a slowdown and it has revised the GDP growth figures for this quarter (January April) to just 6.5 per cent,” Singh said.

He said the declining growth of private consumption, tepid increase in fixed investment and muted exports are the key factors which have led to this situation.

“I have no qualms in saying that the Modi government has left our economy in dire straits,” he said.

Singh said the demonetisation was perhaps “the biggest scam” of independent India, dealt a blow on the country’s economy and decimated the informal and unorganised sectors with crores of people turning jobless. 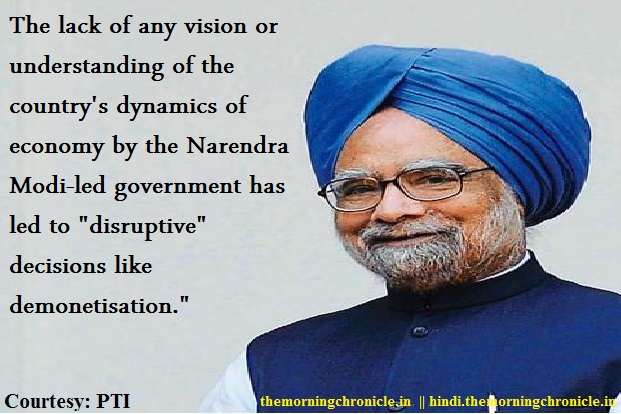 “This was nothing but a criminal act of betrayal for those people who elected this government with such a brute majority,” he said.

“The current government boasts of getting investment, but the reality is that the FDI growth is at a five-year low. Core (indrastructure) sector growth is at a two-year low. Rupee has become Asia’s worst-performing currency. All these are a cause of serious concern,” he said.

Singh said had the Modi government followed the path shown by the previous governments of high economic growth and rapid development, the country could have eliminated poverty in the last five years.

“Instead, they inflicted disruptive and unnecessary decisions like demonetisation on the economy. This is borne out of a lack of economic vision or understanding the dynamics of our economy,” he said.

“Given the extraordinary majority the Modi government enjoyed in Parliament, they could have used their political capital to reap benefits for India on the economic front. Unfortunately they have fallen flat,” he said.

Singh said the Congress’ NYAY scheme (of minimum income for poor) would usher in a new model for social welfare and prudent economics, as economic benefits will give rise in consumption levels resulting in kick starting economic growth. 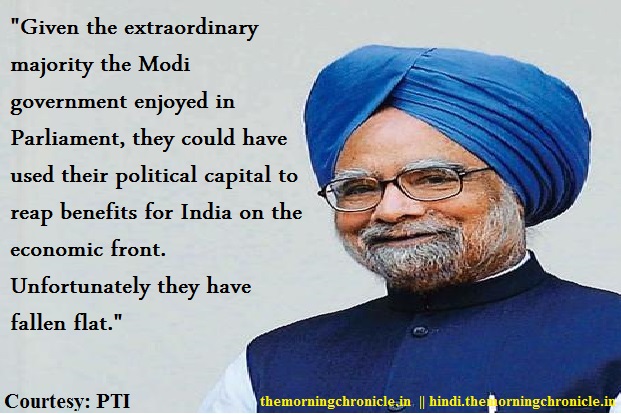 “We think that spending 1.5 per cent of GDP for 20 per cent of the population is absolutely fair and just. The Congress party is also committed to fiscal discipline. Our nearly USD 3 trillion economy has the fiscal capacity to absorb this expenditure.

“There will be no need for any new taxes on the middle class to finance NYAY. Only those who have no compassion for the poor will oppose NYAY,” he said.

The ex-PM said the Congress promises to review and replace the current GST laws with the GST 2.0 regime to truly reflect the intent and purpose of a non-cascading, value-added, indirect tax.

“Our economy is still over-regulated. Structural problems remain. Government control and bureaucratic interference are aplenty. Regulators have morphed into controllers. There is growing interference by the courts in economic policies. We would not have treaded this path,” he said.

Singh said the Congress’ economic philosophy is based on embracing the idea of an open and liberal market economy, creation of wealth, sustainable development, and reduction of inequalities as also assurance of welfare of all sections of people through inclusive growth. “We would have followed all this with more vigour.”

He said the banking sector is “under severe stress” and the way out of “this mess” is to reverse some “gross distortions”, work closely with the RBI, re-start the process of credit delivery and ensure sufficient liquidity and cash in circulation.

“A comprehensive review of the concept, role and functions of Public Sector Banks in order to make them robust and competitive with healthy balance sheets is the need of the hour. Dispute redressal and priority lending is the key,” he said.

The NPA “scare” has brought lending to a virtual halt, the former prime minister said, adding that a “one-size-fits-all approach” drove companies into insolvency while demonetisation shut out all sources of informal credit. 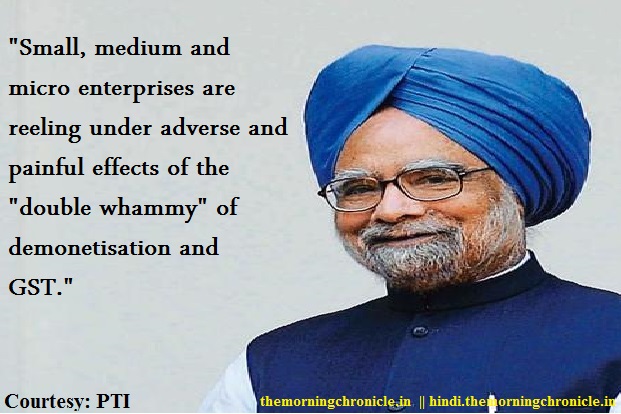 Singh said there are no jobs in the country as Modi snatched away 4 crore jobs from India’s youth and imperiled their future.

“Unwitting and ill-conceived decisions of Demonetisation and a flawed GST, coupled with tax terrorism, have dealt a body blow to both organized and unorganized sectors,” he said. Small, medium and micro enterprises are reeling under adverse and painful effects of the “double whammy” of demonetisation and GST, he said.

September 1, 2019 The TMC Desk India Comments Off on Put Aside Vendetta Politics and Steer Economy Out of Crisis Manmohan Singh Tells Centre

Former Prime Minister Manmohan Singh on Sunday, in a statement in a video, said the state of the economy today was “deeply worrying”. He said the “all-round mismanagement” by the Modi government “resulted in this […]