Some news portals and on social media, people were found gossiping about outgoing Finance Minister Arun Jaitley admission to AIIMS due to heart attack and according to some his death even. Obituaries by his name were also making the rounds on social media.

The government on Sunday had rejected reports on the deteriorating health of outgoing Finance Minister Arun Jaitley as false and baseless, and advised media to stay clear of rumour mongering.

Reports in a section of media regarding Union Minister Shri Arun Jaitley’s health condition are false and baseless. Media is advised to stay clear of rumour mongering.

However, when media tried to contact Jaitley he was unreachable. His office told the media that he was in rest.

Speculations over his ill health do not seem baseless as tweeted by Government spokesperson. This is crystal clear from the tweet of Arun Jaitley today. It seems he is critically ill and Government does not want to reveal this news before its swearing in ceremony to be held tomorrow.

Arun Jaitley tweeted the letter saying “I have today written a letter to the Hon’ble Prime Minister, a copy of which I am releasing:”

I have today written a letter to the Hon’ble Prime Minister, a copy of which I am releasing: pic.twitter.com/8GyVNDcpU7

“During the last eighteen months, I have had serious health challenges. My doctors have enabled me to emerge out of most of them. After the campaign had concluded and you were leaving for Kedarnath, I had orally informed you that even though I was able to discharge the responsibilities assigned to me during the campaign, I would in future, for some time, like to keep away from any responsibility,” Jaitley wrote in the letter. 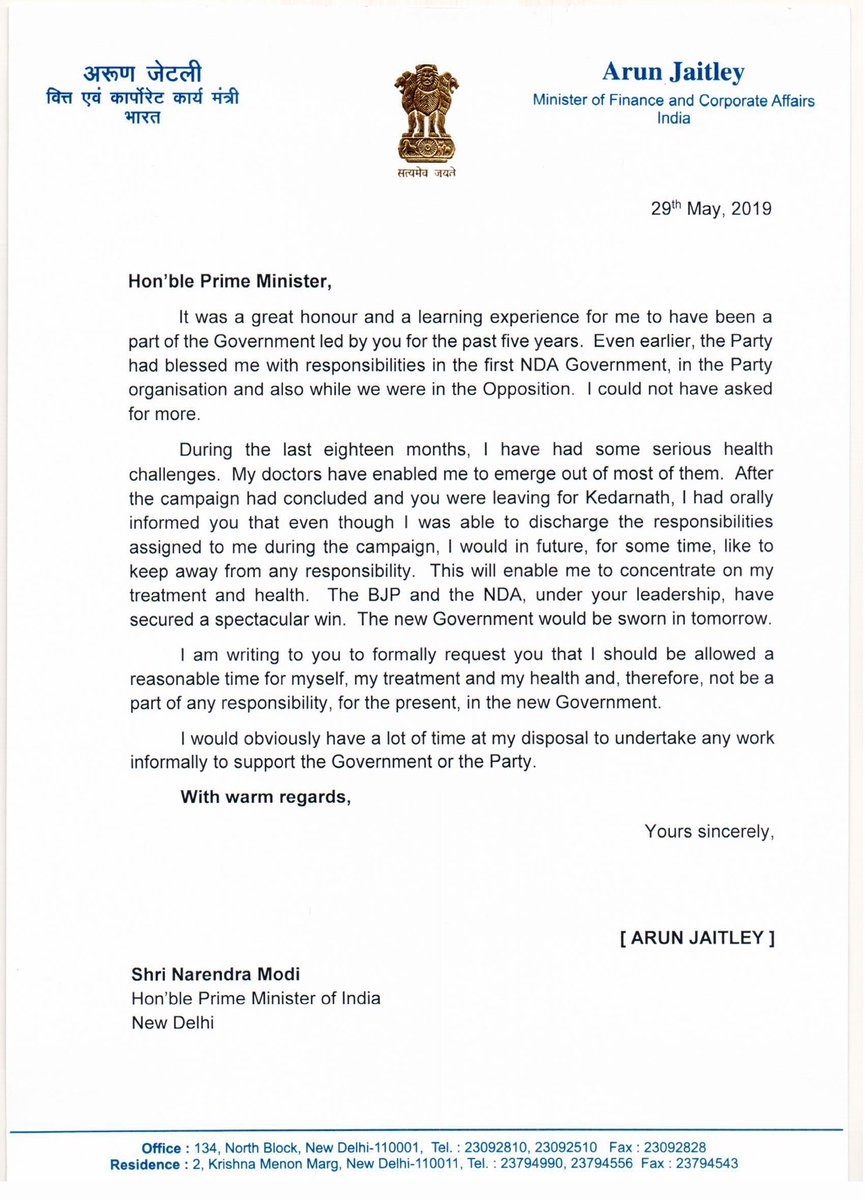 “This will enable me to concentrate on my treatment and health,” his letter further said.

“I am writing to you to formally request you that I should be allowed a reasonable time for myself, my treatment and my health and therefore not be a part of any responsibility, for the present, in the new Government,” concluded outgoing Finance Minister.

Arun Jaitley has been on forefront on demonetisation, GST implementation and transfer of surplus funds of RBI to Modi government and was criticised much. Resignation of Former RBI Governor Urjit Patel was also supposed to be an outcome of differences between Jaitley and Patel.

Arun Jaitley has been suffering from multiple diseases. He had gone to get his soft tissues cancer treated in America just before general elections 2019.

-TMC Desk Guwahati: In a major revamp of the GST tax structure, the GST Council on Friday removed 178 items from the highest 28 per cent category while cutting the tax on all restaurants outside starred-hotels […]

A fire broke out on the first and second floor near the emergency ward of All India Institute of Medical Sciences (AIIMS) in New Delhi on Saturday afternoon. There was no report of any casualty […]

New Delhi, Sep 3  Notwithstanding the appointment of Nirmala Sitharaman as the new Defence Minister, Finance Minister Arun Jaitley, who is presently holding additional charge of Defence, will represent India in a bilateral dialogue on […]