To urge Bihar government to list land reform as one of its key agendas, thousands of people participated in Congregation for Land Rights held in Patna on Monday. The event organized under the banner Bhoomi Adhikar Jan Jutan, which witnessed the presence of a huge population from rural Bihar, asserted on the need for the government to allot rights to the landless on homestead land. The demand for land ownership on homestead land is directly related to about 30 lakh people. In the absence of a fixed residential address and houses on their names, the benefits of about 150 state and Central government policies do not reach out to many people in villages translating into their failure.

Kailash Bharti, a farmers’ leader from Gaya, said “we are here to give a new direction to our decades long fight for land rights and Bihar government can’t deny us our fundamental rights.”

National Convener of social organization Janmukti Sangharsh Vahini Gyanendra, who was among the key organisers, lamented that the laws and provisions for land and forest rights have not been implemented even up to 10 per cent in Bihar unlike in his native state Maharashtra. 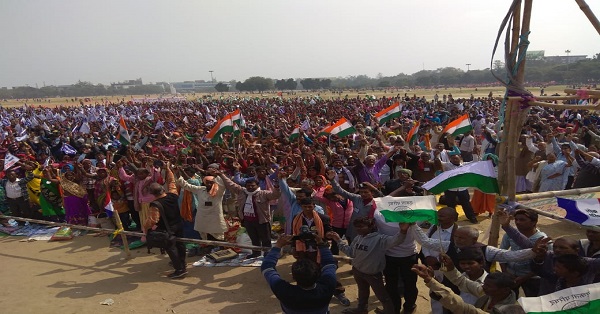 Claiming that after the last 10 years when the state was supposed to see a dawn under the Nitish-Kumar led government, the state of villager’s rights remains in sorry state, a leader from rural Bihar Devanti Devi said you will cry seeing the perishable situation in which we live. Another people’s leader from a village in Champaran district asserted, “We will give our life but not let anyone take away our lands.”

The strength of the congregation lied in the 14 days padyatra carried by its village participants across Bihar under the leadership of land rights crusader from Champaran Pankaj. The people’s march for land rights which began from Bhitiharwa village on February 4 concluded at Gandhi Maidan today, after which the congregation was held. Another striking aspect of the programme was the participation of tribals from Banka whose claims for forest rights remain unfulfilled till date.

It will not be an exaggeration to state that 81 per cent Dalits in Bihar are landless. Mahendra Yadav of Kosi Navnirman Manch also drew people’s attention towards the plight of those who were displaced from their land during floods in Bihar and demanded that allotment of land should include such individuals also.   “What Operation Bhoomi Dakhal Dahani – a land reform campaign started in September 2014 – achieved was that the land claims of 17.4 lakh families in Bihar were identified by the state government for the first time. However, about 80% of the 1.5 lakh families of the 17 lakh claimed to be given land possession have not been settled so far, making it clear the campaign was a failure,” further highlighted Mahendra.

Voices from various quarters –organizations like JASAVA, Lok Parishad, Ekta Parishad, SRUTI NGO in Delhi unanimously asserted that framing a Homestead Land Law or Vasbhumi Kanoon is the need of the hour. The programme was conducted by JASAVA National Convener Ashok Priyadarshi who summed up the stories of the rural population’s distress after each village leader spoke. Pradeep Priyadarshi of Ekta Parishad presided over the programme.

Meanwhile, Activist Kanak brought to light that Swaminathan Comission report which had focused on causes of famer distresses (in regard to land issues) and the rise in farmer suicides, and recommends addressing them through a holistic national policy for farmer was not taken seriously. She further said the government should act upon the commission’s recommendation to address the farmers’ plight. Activist Girija Satish criticized “the government’s approach of acting like landlords by letting land remain unused over allotting it to those who have rights to its possession”.

A message strongly conveyed the message that denial of forest and land rights to their claimants at the grassroots in a state with 87 per cent rural population is among the biggest factors behind its backwardness and its people’s distress. The programme also saw the presence of former RJD National Vice President Shivanand Tiwary.