Madhu Purnima Kishwar (formerly Madhu Kishwar on Twitter), a big name with a huge number of 2 millions of followers, a claimant of founding human rights organisation MANUSHI is becoming everyday nuisance for the Twitterati. Doubt is on Manushi, her organisation itself that it does anything to protect human rights when its founder mocks every day ordinary citizens of the country who do not belong to her core community ie RSS influenced community.

Madhu (Honey) Kishwar actually is averse to her name. She mixes poison in the society without a fail. She does it for a cheap popularity or is paid for what she does is unknown as she has a big reach of 2 millions and any fake news will go to her big number of followers thus influencing them. No surprise that she may be a paid worker of BJP IT Cell.

Her tweets and retweets speak Pakistan, Jihadis, TukdeTukdeGangs, Muslims and so on. Her most shared pieces are from the sites run by pale journalists or a piece that suits to the narrative of rioters and haters in India and overseas.

OpIndia is one of her favourite news portals where she shares the things from and writes her notes on. Look what the portal says about the Delhi riots post a former BJP MLA’s instigating speech in presence of Delhi Police top cops in which at least 43 have been declared dead so far and many more emerging day by day and most of them are Muslims.

What on Quora, a Q&A website, says about this website is enough to know why Kishwar quotes it. 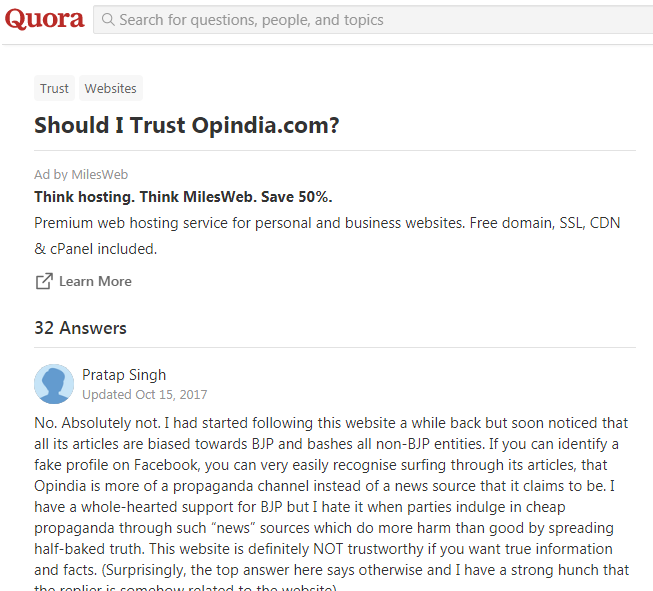 OpIndia is a site that according to Wikipedia page has been rejected to be accredited as a fact-checker on grounds of political partisanism and poor fact-checking methodologies. 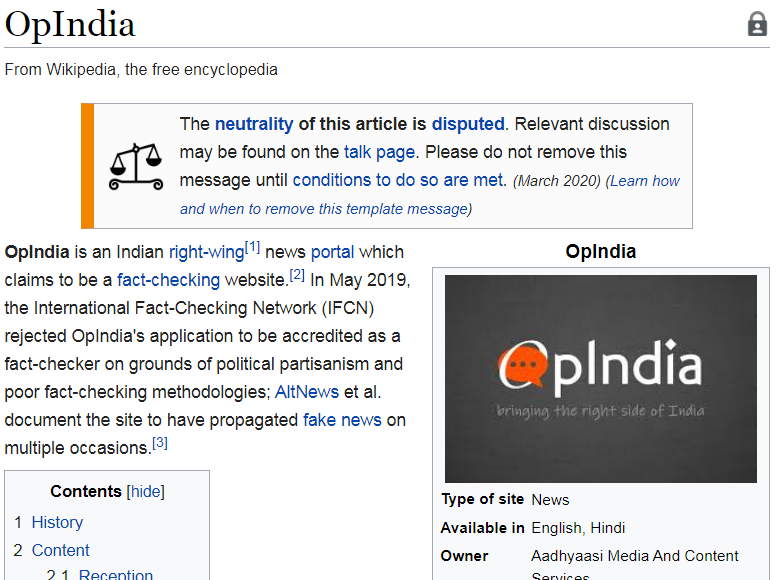 Madhu Kishwar in her reply to one of the most fair journalists Arfa Khanum Sherwani said “”India is not indebted” to #ShaheenBaghJehadans. Only #BreakUpIndiaGang is indebted to them. India would like to get rid of all #MiniPakistans such as #ShaheenBagh”

“India is not indebted” to #ShaheenBaghJehadans.

Only #BreakUpIndiaGang is indebted to them.

ShaheenBagh is a place of protest where Indian women across all religions though majority of them are Muslim have been protesting against CAA, a law that discriminates on the basis of religion and against the ethos of Indian culture and Indian constitution.

The same way her reply to another journalist Faye Dsouza she wrote “Please check dictionary meaning of “privacy” Evangelist @fayedsouza. Anyone who comes out on streets to create mayhem, throw petrol bombs & fire bullets & set fire to homes,is acting in public,not in privacy of home.Thanks to CCTV cameras, culprits are getting caught on the spot”

Please check dictionary meaning of “privacy” Evangelist @fayedsouza.
Anyone who comes out on streets to create mayhem, throw petrol bombs & fire bullets & set fire to homes,is acting in public,not in privacy of home.Thanks to CCTV cameras, culprits are getting caught on the spot https://t.co/sisbrgZ43E

Look at her tweets and decide what she is on Twitter for except spreading a target propaganda towards a particular community.

She not only targets a particular party but she does everything to malign all Anti BJP Parties.

A Must Read thread on India’s former president #ZakirHussain.

Most of us in India hang our head in shame that we were fooled by your fraudulent claims. Your athiesm is cast in #JinnahMould-he too was pork eating, sharaabi, kabaabi, aiyaash #Sickular.Yet he become chief instrument of #MissionGhazwaEHind. @Javedakhtarjadu, you are #Jinnah2.0 https://t.co/gxyJExqyZy

53 died coz Jehadis declared war in Jaffrabad. Killed policemen &innocents. Retaliation by Hindus controlled swiftly by police. In my own area near Shaheen Bagh, Hindu protestors were lathi charged or detained by police& forced to retreat many times in order to prevent riots https://t.co/geZKTx7pHh

There are many Madhu Kishwars on Twitter and there are many Kapil Mishras on streets. They have one and only agenda to destruct India by spreading animosity among Indians.

Delhi riots: This ‘Hero cop’ who braved a mob to Keep His Professional Oath Intact

February 29, 2020 The TMC Desk Politics Comments Off on Delhi riots: This ‘Hero cop’ who braved a mob to Keep His Professional Oath Intact

इस स्टोरी को हिंदी में पढ़ें Whenever Delhi Riots 2020 will be discussed, good people and partiot Indians would remember at least one name who was in uniform and braved a mob to save lives […]

March 12, 2020 The TMC Desk Politics Comments Off on How Amit Shah’s Police Turned Against Muslims: A New York Times Report

Amit Shah, Home Minister of India proudly claimed in the parliament on Wednesday that how his Delhi Police tackled riots and controlled riots in 36 hours in which more than 50 died, more than 500 […]