Mir Osman Ali Khan, if you do not know this person, you must know. India badly needs to remember these sons of India today who we have forgot ungratefully. Mir Osman Ali Khan was the last Nizam of the Princely State of Hyderabad and Berar. He was born on 6 April 1886 and died on 24 February 1967. He ruled Hyderabad between 1911 and 1948, until it was annexed by India. He was styled as His Exalted Highness H.E.H The Nizam of Hyderabad. Later he was made the Rajpramukh of Hyderabad State on 26 January 1950 and continued until 31 October 1956, after which the state was partitioned on linguistic basis and became part of Andhra Pradesh, Karnataka and Maharashtra.

He built the Hyderabad House in Delhi, now used for diplomatic meetings by the Government of India.

In 1937, he was on the cover of Time magazine, labelled as the richest man in the world. 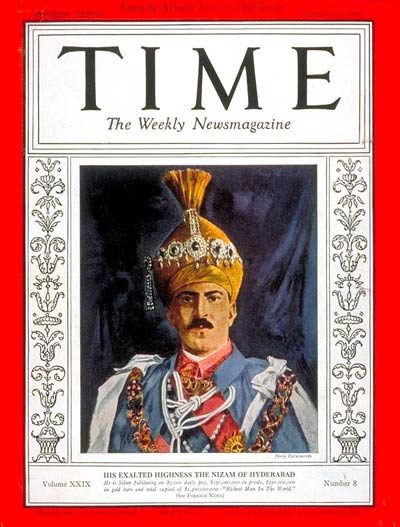 During his reign, he introduced many educational reforms. Almost 11% of the Nizam’s budget was spent on education.

He made large donations to many institutions in India and abroad with special emphasis given to educational institutions such as the Jamia Nizamia, the Darul Uloom Deoband, Banaras Hindu University and Aligarh Muslim University.

There is a very interesting story related with his donation of Benaras Hindu University. It was a very chilly night when he felt like shivering and ordered his aides a new blanket on a condition that the blanket should not cost more than Rs. 25. His servant could not find a blanket at Rs.25 and returned back. The blanket cost Rs. 35. Nizam of Hyderabad whose total  wealth was estimated 2 percent of total US GDP then made do with his old blanket.

However, when a few hours later, he got a request from the Maharaja of Bikaner for a donation for the Benaras Hindu University, he sanctioned Rs. 1 lakh without a second thought.

Last Nizam Hyderabad had done a lot for agriculture in his times. The foundation of agricultural research in Marathwada region of erstwhile Hyderabad state was laid by the Nizam with commencement of the Main Experimental Farm in 1918 in Parbhani. Though during the Nizam’s rule agricultural education was available only at Hyderabad, crop research centres for sorghum, cotton, and fruits existed in Parbhani. After independence, this facility was developed further by the Indian government which turned into Marathwada Agriculture University on 18 May 1972.

He founded Osmania University; today it is one of the biggest universities in India. Schools, colleges and a Department for Translation were set up. Primary education was made compulsory and provided free for the poor.

In 1941, he started his own bank, the “Hyderabad State Bank” (now State Bank of Hyderabad) as the state’s central bank. It was established on 8 August 1941 under the Hyderabad State Bank Act. The bank managed the “Osmania sikka”, the currency of the state of Hyderabad. It was the only state in India which had its own currency, the Hyderabadi rupee. Hyderabad was the only state in British India where the ruler was allowed to issue currency notes. In 1953, the bank absorbed, by merger, the Mercantile Bank of Hyderabad, which Raja Pannalal Pitti had founded in 1935.

In 1956, the Reserve Bank of India took over the bank as its first subsidiary and renamed it State Bank of Hyderabad. The Subsidiary Banks Act was passed in 1959. On 1 October 1959, SBH and the other banks of the princely states became subsidiaries of SBI. It merged with SBI on 31 March 2017.

Begumpet Airport was established in the 1930s with formation of Hyderabad Aero Club by the Nizam. Initially it was used as a domestic and international airport for the Nizam’s Deccan Airways, the earliest airline in British India. The terminal building was created in 1937.

The Nizam possessed such enormous wealth that he was portrayed on the cover of TIMES magazine on 22 February 1937, described as the world’s richest man. He used the Jacob Diamond, a 185-carat diamond that is part of the Nizam’s jewellery, a precious collection running into several thousand crores of rupees today, as a paperweight. During his days as Nizam, he was reputed to be the richest man in the world, having a fortune estimated at US$2 billion in the early 1940s ($34.9 billion today) or 2 per cent of the US economy then. At that time the treasury of the newly independent Union government of India reported annual revenue of US$1 billion only. The Nizam is widely believed to have remained as the richest man in South Asia until his death in 1967, though his fortunes fell to US$1 billion by then as more than 97% of his wealth, including jewellery belonging to his family including his daughter’s and grand daughters, was taken away by the newly formed Indian Government. The Indian government still exhibits the jewellery as Nizam’s jewellery Exhibition (now in Hyderabad).

Prime Minister Lal Bahadur Shastri visited Hyderabad and requested the Nizam to contribute to the National Defence Fund, set up in the wake of the Indo-Chinese skirmish. Mir Osman Ali announced that he would contribute five tonnes of gold to augment the war fund. In monetary terms, the Nizam’s contribution was about Rs 75 lakh, or about three-fourth of the annual Privy Purse he received from the Centre.

The Nizam’s donation of 5,000 kg of gold to the National Defence Fund in 1965 was the biggest ever contribution by any individual or organisation in India and remains unsurpassed till today.

There is also an interesting story with his donation to Indian defence. When the trunks containing the coins were being loaded into vans, the Nizam told the officer in his characteristic style. “I am donating the coins not the trunk. See that they are returned.”

According to the Times Magazine report published on February 22, 1937, the Nizam of Hyderabad is supposed to have once refused to pay 6¢ for a dab of ice cream, rebuking the vendor for asking this “high price.” In Sunday supplements he is said to have his worn clothing cut down to fit the next smaller member of the Royal Family, and so on. One of his old Hyderabad customs is never to receive one of his subjects, no matter how poor, unless the subject brings a cash present for His Exalted Highness.

(With inputs from Wikipedia and Times Magazine)

Rape as an instrument of terror

May 4, 2018 The TMC Desk TMC Special Comments Off on Rape as an instrument of terror

–Ibrahim Hafeezur Rehman The treatment and thought towards women is reflective of the mindsets and character that a large chunk of males carry in India and perhaps in the world. Recent incidents are clear pointers to this […]