“Buri nazar wale, tera muh kala” the warning to evil eyes are boldly painted on trucks plying on Indian highways. Truck drivers and their “khalaasis” are forever concerned about evil eyes as they crisscross India’s potholed roads. Evil eyes are aplenty on highways. As an IPS officer, I have recovered truck drivers’ blood soaked bodies with their throats slit. I have seen terror in corpses’ eyes.  Carrying goods from Kashmir to Kanyakumari is no easy task. Gangs of highway robbers kill truck drivers and vanish in thin air with goods. In India, world’s largest mobocracy, sometimes these gangsters are elected to the Lok Sabha and the Vidhan Sabhas and robbery files are quietly closed. If a truck turns turtle, goods are looted by “bhola bhala” villagers while the driver bleeds to death. Then there are cops. Men in khaki on highway patrol. They extort money from truck drivers and heap abuses on them. Naturally, truck drivers wish to blacken faces of those with evil eyes. Buri nazar wale, tera muh kala. This has become truck drivers’ war cry. A secular war cry used by both Hindu and Muslim truck drivers. In a country divided along communal lines, it is reassuring to see that some sentiments are shared by all religions. 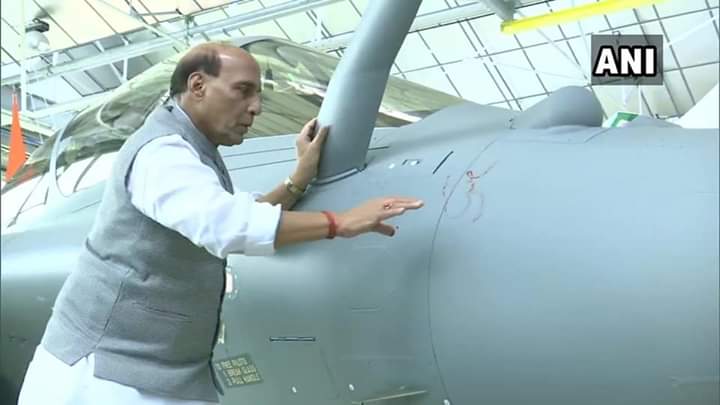 Why am I writing all this stuff? Because our honourable Defence Minister Rajnath Singh is following truck drivers’ footprints. Rajnath worshipped a Rafale fighter plane in Paris. LEMONS WERE PLACED UNDER RAFALE’ TYRES TO WARD OFF EVIL EYES. Personally, I have nothing against lemons. I love lemons. They are full of Vitamin C. We had a small lemon tree in my Darbhanga house campus. I enjoyed plucking lemons. Lemon trees are very thorny and plucking lemons is not for the faint hearted. But I was a brave boy. Thorns gave me bad bruises but I took lemons to the kitchen.

Once I was reading Shreya Ghosal’s interview. The celebrated singer declared that she loved “gondhoraj lemu” in her masoor daal. Gondhoraj means the king of flavors. I was intrigued. I called a Bengali friend of mine and sought enlightenment. He informed me that “gondhoraj” was known as “jamiri nimboo” in Bihar. Kagji nimboos are yellow and jamiri ones are dark green. And lemons have long been treated as an antidote to evil eyes. In the Bollywood number “Nimbura, Nimbura”, a drop dead gorgeous Aishwarya Rai dances with a lemon in her hand. She extols a lemon’s virtues: jo buri nazar ho, khatti howegi. Some of friends believe that her husband’s career is not taking off due to someone’s buri nazar and only Aishwarya’s lemons can save Abhishek Bachchan’s sinking career!

I also like green chillies. I am second only to parrots as far as fondness for green chillis is concerned. I eat so many chillis that my friends call me Sheikh Chilli! In India, nimboo and mirch are looked upon as a deadly combination to beat back buri nazar. Shopkeepers keep lemons and chillis on their doors as a warning to their enemies. In a Bhojpuri movie song, the hero suggests the heroine to tie some lemons and chillis to her hair because she is too beautiful. I salute the lyricist’s imagination.

Personally, I hold a very dim view of Rajnath. As the UP CM, he was very close to Rajput mafia dons. Poorvanchal’s mafia don Brajesh Singh was his langotia yaar. The CM bungalow on Lucknow’s Kalidas Marg was a magnet to Rajput gangsters. If Rajnath Singh has his way, he will rename Rafale as “Maharana Pratap Yuddhak Vimaan” to appease his Rajput vote bank.

Rafale has become a byword for scam. Allegedly, Rs 30,000 crore were siphoned off by two Gujarati buddies, Narendra Modi and Anil Ambani. The HAL (Hindustan Aeronautics Limited) was overlooked in favour of Reliance Defence. The then Defence Minister Manohar Parrikar was left out of the Indian delegation that went to Paris. In Rahul Gandhi’s words Parrikar was purchasing fish in Goa when Modi was purchasing Rafale in Paris. The Modi Govt turned down the demand to constitute a JPC (Joint Parliamentary Committee) to look into the Rafale deal. When the CBI Director Alok Verma started going through Rafale papers, he was illegally forced to go on leave at midnight! All these facts give rise to suspicion. Daal me kuchh kala hai. Perhaps Rajnath the Rajput had Rafale ghotala in his mind when he placed lemons under tyres. Lemons will protect scamsters from “evil eyes” of trouble makers like Rahul Gandhi, Prashant Bhushan and N. Ram of the Hindu newspaper.

Personally, I think that Narendrabhai Modi will share “khichri” with Anilbhai Ambani in the Tihar Jail if a fair probe into the Rafale deal takes place. They say in Hindi: Khichri ke char yaar, ghee, papad, dahi, achar! In honor of Rajnath’s memorable Paris visit, lemons can also be added to Modi’s khichri in the Tihar Jail!

(Mr. Amitabh Kumar Das is a 1994 batch IPS Officer. His views are personal.)

NRC in Bihar: Ranveer Sainiks should be thrown out of the State

September 17, 2019 The TMC Desk Left is Right Comments Off on NRC in Bihar: Ranveer Sainiks should be thrown out of the State

The motormouth Union Minister Giriraj Singh is at it again. The Bhumihar leader from Bihar suffers from chronic verbal diarrhoea. Now, Giriraj has proposed an NRC (National Register of Citizens) for the state, in the […]

When India is governed by a Chor-Chowkidar with a fake BA degree, it is reassuring to see that all countries in the world are not so unlucky. These days, I have turned into an ardent […]

September 13, 2019 The TMC Desk Left is Right Comments Off on Remembering Dara Shikoh: The Best Ruler, Hindustan Never Had