Narendrabhai Damodardas Modi’s chest reportedly measures 56-inch. And he doesn’t allow his wife Jashodaben to enter his house! Modi Bhakts compare him with Gautam Buddha who left his wife when the poor lady was asleep. Narendra Modi didn’t wait for his wife to fall asleep. He deserted Jashodaben when she was wide awake. Modi Bhakts can claim that Modi is much more daring than Gautam Buddha! Now Modibhai has gone one step further. THE MODI GOVT HAS DECIDED THAT NO INDIAN WOMAN WOULD TRAVEL TO SPACE! Hindu fanatics don’t allow women to enter the Sabarimala Temple in Kerala.

According to the Hindu mythology, Lord Ayyappa is a brahmachari (celibate ). Orthodox Hindus reason that Ayyappa ‘s celibacy would be in danger if menstruating women enter his temple. When the Supreme Court allowed women to enter the Sabarimala Temple, all hell broke loose. Ayyappa devotees took to streets protesting against the SC verdict. The BJP which has yet to open its account in Kerala jumped to fish in troubled waters. It tried to turn Sabarimala into the Ayodhya of the South. Smriti Irani thundered that women having periods must not pollute Sabarimala! 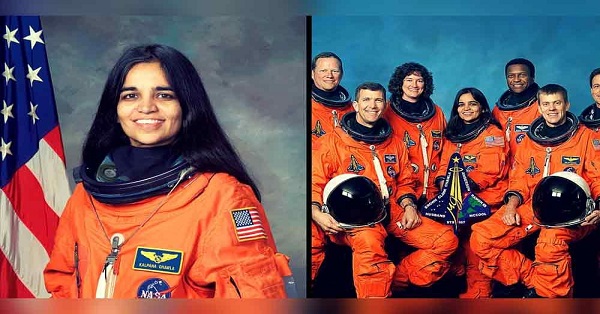 I think that the decision to prevent women from entering space also stems from the Hindu right wing’s commitment to safeguard Lord Ayyappa ‘s celibacy at all costs. Using their twisted logic, Hindutva warriors must have reasoned that if women stormed Ayyappa ‘s heavenly abode, his celibacy would be endangered. Indian space agencies have given the flimsy ground that there are no women test pilots. Therefore,only men will be considered for the Gaganyaan mission. For the uninitiated, Chandrayaan and Gaganyaan are two missions of the ISRO (Indian Space Research Organization). Chandrayaan, as the name suggests, is a mission to the moon. This mission is unmanned.  However, Gaganyaan, the mission to space, is manned. In other words, it will take astronauts to space! Rakesh Sharma was the first Indian to travel to space. But it was a Soviet rocket that took him to stars. Those were heydays of the Indo-Soviet friendship.

I am no space scientist. I studied history. Panipat Battles interest me more than Star Wars! But one thing I know clearly. Fighter pilots are best suited to travel to space. Rakesh Sharma too was Squadron Leader in the Indian Air Force. His stand-by Ravish Malhotra was a Wing Commander. In recent years,women have broken many glass ceilings. Now, Indian women are also fighter pilots. And one of them is Miss Bhavna Kanth, from my own district Darbhanga in Bihar. She comes from a remote village Baur under the Ghanshyampur block. From a flood-ravaged Bihar village to cockpits of fighter planes. India is proud of her. But not Narendra Modi. If Modi has his way, he will send Anil Ambani and Gautam Adani to space!

When Afghanistan was ruled by the Taliban, women were at the receiving end. Black-turbaned Talibanis made life “jahannum” for the fair sex. Women were caged inside tent-like burqas. Girls’ schools were bombed. Beauty parlours were shut down. Make-up was banned. No woman was allowed to take up a job. They were flogged in public for petty crimes. Women were only child-making factories for these bearded kathmullas. When the USA bombed Afghanistan, the Taliban chief Mulla Umar himself donned a burqa and escaped on a bike! And Hindu fanatics used the Taliban to whip up Islamophobia.

RSS is no less anti-women than the Taliban. No woman has been allowed to head the RSS. RSS supremos are either Golwalkars with big beards or Bhagwats with big moustaches. No sari-bindi for RSSwallas. Now the Modi Govt, remote controlled by Nagpur (RSS Headquarters) has decided against sending women to space. As Baba Tulsidas infamously declared: Dhol, Ganwar, Shudra, Pashu, Nari. Ye sab taaran ke adhikari! (Drums, villagers, Dalits, animals and women deserve beatings).

The USA sent Kalpana Chawla, an Indian-origin lady aboard space shuttle Columbia. She was born in Karnal, Haryana. She was educated at Tagore Bal Niketan, a small school in Karnal. America recognised her talent and made her an astronaut. When she was killed in the Columbia crash, Stars and Stripes (the US flag) flew at half-mast. And here in India, Narendra Modi won’t let a woman go to space.

(Mr.Amitabh Kumar Das is a 1994 batch IPS Officer. His views are personal.)

Lessons from Maharashtra: Mafiagiri has limitations

November 27, 2019 The TMC Desk Left is Right Comments Off on Lessons from Maharashtra: Mafiagiri has limitations

The political “mafiagiri” unleashed by Narendra Modi and Amit Shah has met its Waterloo in Maharashtra.  The curtain has come down on the Devendra Fadnavis Govt. “Bade  beaabroo  hoke nikle, tere kooche se“, Fadnavis announced […]

10th Pass As Chancellor: Fagu Chauhan is an insult to Bihar

July 28, 2019 The TMC Desk Comment Comments Off on 10th Pass As Chancellor: Fagu Chauhan is an insult to Bihar

My Babooji (father) is 102. He did his MA from the Patna University way back in 1942. He still recalls with pride those glorious days of the PU. How Sachchidanand Sinha twirled his moustache when […]

Dan Morriosn: An American journalist on a voyage to unveil decades old murder mystery of Jharkhand

January 7, 2019 The TMC Desk TMC Special Comments Off on Dan Morriosn: An American journalist on a voyage to unveil decades old murder mystery of Jharkhand

-Amitabh Kumar Das Dan Morrison is a world famous journalist who traveled down the length of the White Nile, from Lake Victoria to the Mediterranean Sea, through the entirely of Uganda, Sudan and Egypt. He […]