New Delhi, Sep 13  In a stunning comeback, the Congress’ students wing, National Students Union of India (NSUI), on Wednesday bagged three of the four top positions, of President, Vice President and Joint Secretary, in the Delhi University Students Union (DUSU), while the RSS-affiliated ABVP managed only the Secretary post.

Last year, the Akhil Bharatiya Vidhyarthi Parishad (ABVP) had won three seats, except the Joint Secretary post, which was won by the NSUI.

National president of Swaraj India, Yogendra Yadav also tweeted. He wrote “Winning organisations are different but losing organisation is one – the ABVP”. He further wrote that “winning has different meanings but losing has only one message – cannot accept politics of hatred.” 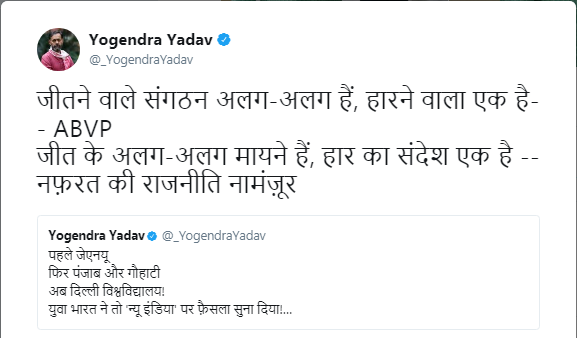 Gur Mehar who was once trolled by the ABVP and the BJP supporters for her statement on surgical strike also tweeted. “Congratulations to every DU student, you’ve reclaimed your university back. You’ve proved violence and hooliganism will not be tolerated!” she wrote.

On Tuesday, students from 51 colleges cast their ballot to choose the four central panel posts in the DUSU elections that saw a triangular fight among the RSS-backed ABVP, Congress’ NSUI, and CPI-ML Liberation’s AISA.

With inputs from AINS

The results of students’ union elections across the country from Rajasthan, Punjab, Chandigarh, Tripura, and most prominently JNU and Delhi University, have given clear indication that the youth, especially the educated have seen through the […]