In the Rafale jet deal, documents featured in a French aviation blog may fuel more controversy amid opposition allegations that France snagged the Rs. 59,000 crore deal as a trade-off for aeronautics major Dassault tying up with Anil Ambani’s company.

Images of two trade union documents put up by the French blog Portail Aviation may add fodder to the political wrangling over the deal for 36 Rafale jets sealed by Prime Minister Narendra Modi with the French in 2016.

The images are of documents published by two unions of Rafale-maker Dassault – the CFDT and CGT. These are minutes of a meeting held on May 11 2017, in which the number 2 of Dassault Aviation, Loik Segalenn, is talking about the joint venture with Anil Ambani’s Reliance Defence. 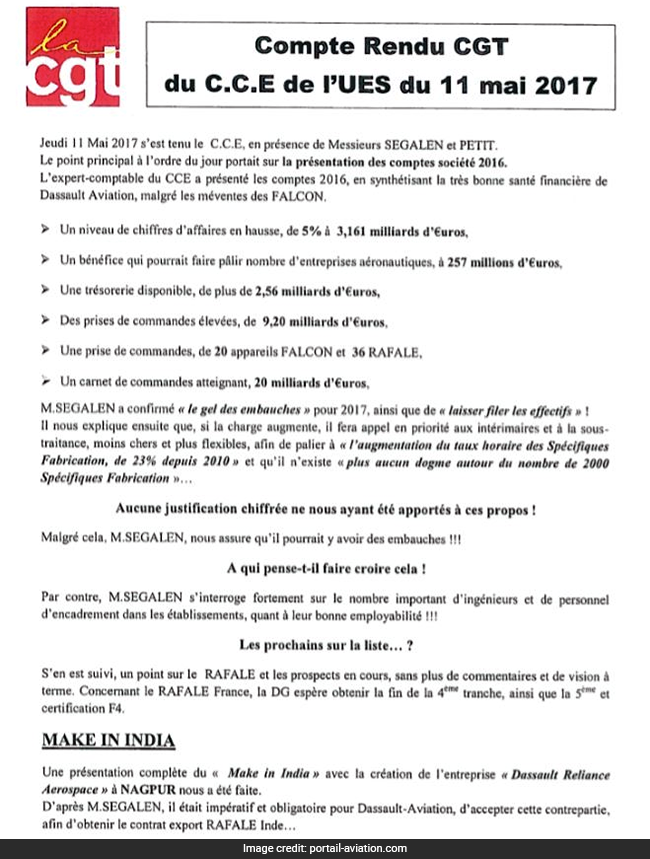 The blog does not interpret the documents and leaves it to readers to conclude whether or not Reliance was imposed on the French as a partner as a condition for the deal.

The CFDT’s document was mentioned earlier in a report by the French publication Mediapart just after former French President Francois Hollande’s explosive statement that France had no choice when it came to selecting Anil Ambani and his rookie company as offset partner for Dassault. According to Mediapart, an internal document of Dassault confirmed Mr Hollande’s statement.

Dassault denied the allegation, saying the reference in the document was to the obligation to make offset investments in India and not the compulsion to get into a joint venture with Anil Ambani’s Reliance Defence.

Details of the meeting appear to present a different picture.

The CGT statement says, “…a complete presentation of ‘Make in India’ with the creation of the enterprise ‘Dassault Reliance Aerospace’ at Nagpur was done for us. According to Mr (Loik) Segalen it was imperative and obligatory for Dassault Aviation to accept this “contrepartie” in order to obtain the export contract Rafale India.” The French word used is “contrepartie”, which can mean “compensation” or could have the negative sense of a “trade off”.

The second union (CFDT’s) statement talks about ‘Make in India’ being “the inevitable consequence” of the deal “imposed” by India, and says a joint venture with Reliance was created to attain this objective.

It is evident that the statements are not talking only about the offset obligation but also about the joint venture with Reliance. Whether the Reliance partnership was mandatory are among the questions raised by the opposition in India as well as a section of the French media.

The Congress has accused the government of corruption and crony capitalism. The party had seized on French president Hollande’s comment to Mediapart last month to go hammer and tongs against the government, alleging that Anil Ambani’s company was imposed as a preferred partner on the French.

(This story has been taken from NDTV. You can read its original here.)

–TMC Desk Shimla, Dec 24: Five-time legislator Jairam Thakur, who rose from the ranks and is known for his humble, low-profile stature, will be the 13th Chief Minister of Himachal Pradesh, the BJP announced on Sunday. […]

–TMC Desk New Delhi, Jan 25: Congress President Rahul Gandhi has hit out at the BJP after a school bus in Haryana’s Gurugram was attacked by Karni Sena supporters over the release of ‘Padmaavat’ and accused […]