Reserve Bank of India has decided to write an early cheque to the government to help prevent its budget shortfall from widening, even as it opens its coffers to fund pre-election sops.

The banking regulator follows a July-June financial year and, by convention, annual dividends are transferred to the government only in August.

The payout is also significant because it marks the culmination of a long stand-off between prime minister Narendra Modi’s government and Mint Street. The demand for an interim dividend from the central bank was a flash point that had strained the relationship between former RBI governor Urjit Patel and the Modi government. Patel resigned in December last year citing “personal reasons,” but the friction with the government was public by then.

Now with Shakitikanta Das, a retired bureaucrat, at the RBI’s helm, the government seems to have got its way.

The interim dividend will help the cash-strapped government fund the Pradhan Mantri Kisan Samman Nidhi—an income programme for marginal farmers announced in the interim budget earlier this month. With an eye on general elections, expected in April-May this year, the government had announced the scheme, which promises an annual assured income of Rs6,000 to farmers who own up to 2 hectares of land. The average farm size in India is about 1 hectare, according to the 2015-16 agricultural census.

An amount of Rs75,000 crore was allocated for the scheme and the centre was expecting an early payout from the RBI to fund the programme. The budget also let the fiscal deficit targets slip a tad to 3.4%, from the earlier 3.3%, on account of the rural income plan. The fiscal deficit, the difference between a country’s revenue and expenditure, is a key indicator of the macroeconomic health.

“This interim dividend will help to meet the revised fiscal deficit target,” Shubhada Rao, economist at YES Bank told Quartz. “Apart from this, the disinvestment target and a higher goods and services tax (GST) collection in the January-March quarter will also help the government in meeting the revised target.”

For the ongoing financial year, the government expects a combined dividend of Rs74,140 crore from the RBI and state-run banks and has budgeted for Rs82,910 crore in the next fiscal year. 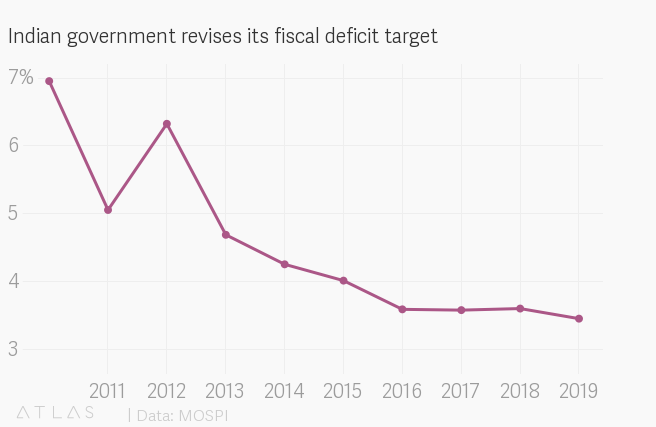 To pay or not to pay

Under Section 47 of the RBI Act, 1934, the central bank, after making various provisions, transfers a part of its surplus to the government. However, paying even before the year has ended is not a prudent practice, believes Ananth Narayan, associate professor, finance at SP Jain Institute of Management and Research in Mumbai.

“Interim dividends are not ideal. This is because you are advancing the date of a future payment to make room for current expenditure, which does raise questions on the principle front,” he added.

Even former RBI governor YV Reddy had slammed the government for seeking interim dividends from the central bank to fund its budget plans. “The immediate fiscal needs seem to take precedence over a renewed assessment of the capital needs of RBI,” Reddy had said at an event earlier this month.

The total reserves with the banking regulator stood at Rs9.6 lakh crore at the end of its financial year ended June 2018, up from Rs8.38 lakh crore in the previous year.

The appropriate quantum of fund transfer the RBI must make to the government has often been debated. A recent study by Mumbai-based think tank Centre for Advanced Financial Research and Learning showed the RBI has insufficient capital and is in fact under-capitalised, compared with other central banks around the world.

On the contrary, S Gurumurthy, a government-appointed nominee on the RBI board, had claimed that the banking regulator had reserves worth up to 28% of its assets, while studies suggested that the healthy level is between 12% and 18.76% of assets. 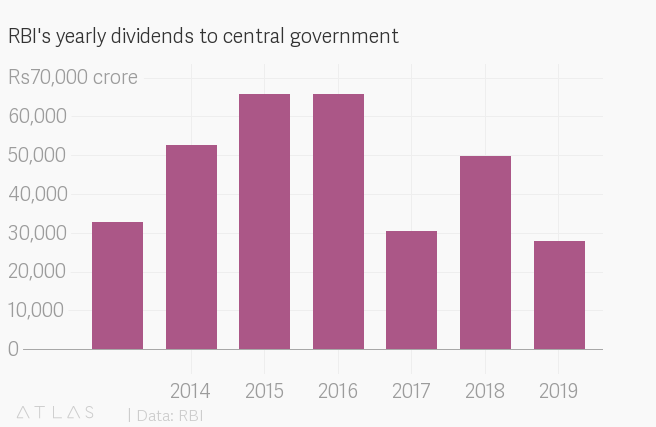 An expert committee is currently reviewing the economic capital framework of the RBI, and it will also be looking at the dividend distribution policy of the central bank.

With some changes from the article published in QZ dot COM.

June 22, 2018 The TMC Desk TMC Special Comments Off on Bank having Amit Shah as a director collected highest amount of banned notes among DCCBs: RTI reply

News18, Firstpost, New Indian Express, and Times Now initially had this story from IANS on their sites however took down later likely fearing another defamation case against them. New Delhi, June 22,2018 (TMC Desk) A […]

RBI holds repo at 6% thrice in succession with neutral stance

February 7, 2018 The TMC Desk Economy, India Comments Off on RBI holds repo at 6% thrice in succession with neutral stance

–TMC Desk Mumbai, Feb 7: The Reserve Bank of India (RBI) kept its key interest rate unchanged at 6 per cent for the third time in succession at its final bi-monthly monetary policy review of the […]