In a letter written to Home Minister of India, Rajnath Singh, TII Executive Director, Rama Nath Jha had requested Home Minister to review the decision of the government.

The letter written to Home Minister said that some whisleblower/activist had approached the organisation and alleged illegal removal of Bihar Cadre IPS Amitabh Kumar Das who had given compulsory retirement by the Bihar government in pursuance of so called public interest this month. The organisation said that the term “public interest” seemed very ambiguous as appropriate reasons for his retirement were not communicated to him nor even those were made to the public. 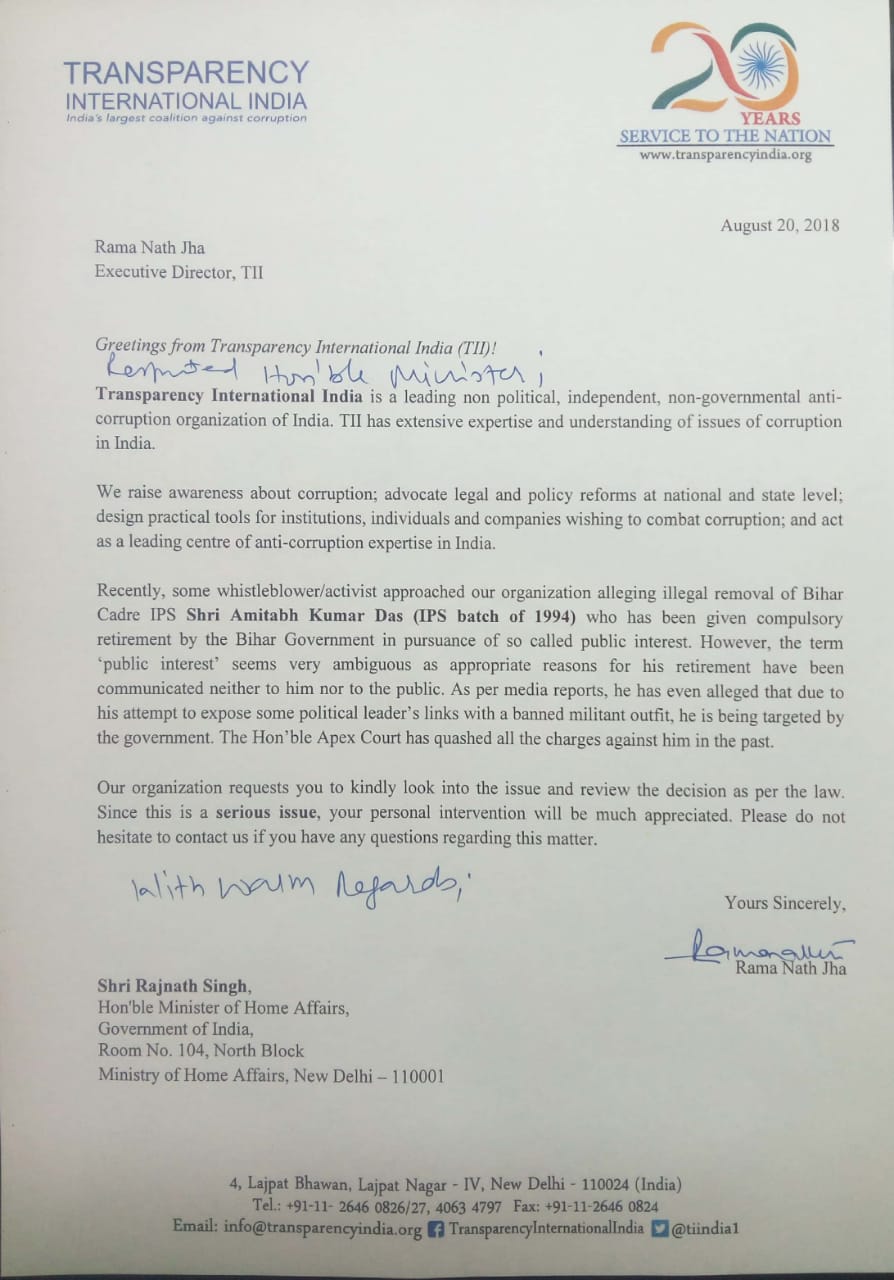 Amitabh Kumar Das is 1992 batch Bihar cadre IPS and was forcibly retired last month sending him a notice of retirement with immediate effect with three months’ salary. He had alleged that it was due to his exposing politicians especially Nitish Kumar and Giriraj Singh nexus with Mafia dons and banned outfit Ranvir Sena respectively. His promotions were held up for years and after an order of the apex court he was promoted to IG rank.

The IPS Officer was posted as assistant commissioner, civil defence in Patna at the time of his removal. He told that the government’s order was in contempt of the Supreme Court order, which dismissed all cases against him in September 2016 and had given him clean chit.

Amitabh, who hails from Darbhanga district, was also pursuing a case in the Central Administrative Tribunal (CAT) Patna bench seeking his posting as an IG.

So many intellectuals and social activists have come out in support of Das and expressed their anger over his forcibly retirement. An activist known for his efforts to save Patna Museum and writer of Nandigram Diary Pushpraj Shastri condemned his removal and urged people to come out in support of honest officers like Amitabh Das. Shabnam Hashmi, Saty Narayan Madan and many more have also condemned this incident.

We Indians lionise Mangal Pandey for standing up to his British seniors, but when in the independent India a jawan speaks the truth, he is hounded out of the service. We Indians have become […]

New Delhi, May 22, 2018 (TMC Desk) The Central government on Tuesday said India is safe for minorities while the BJP virtually attacked the Archbishop of Delhi, saying no one should speak to mobilise people on […]