Chief Minister Shivraj Singh Chouhan’s claim that roads in Madhya Pradesh are better than those in Washington DC has made him laughing stock on micro social networking site.

Shivraj Singh Chouhan who is on a visit to the US to attract investors to the state said “When I got down at the Washington Airport and travelled on roads, I felt the roads in Madhya Pradesh are better than the United States,” when he was speaking in a meeting in the US. This statement has made many laugh and troll him on Twitter.

“This person has started marijuana,perhaps. Even an addict of Dhatura cannot dare to make the claim!” tweeted Ricky Rick. 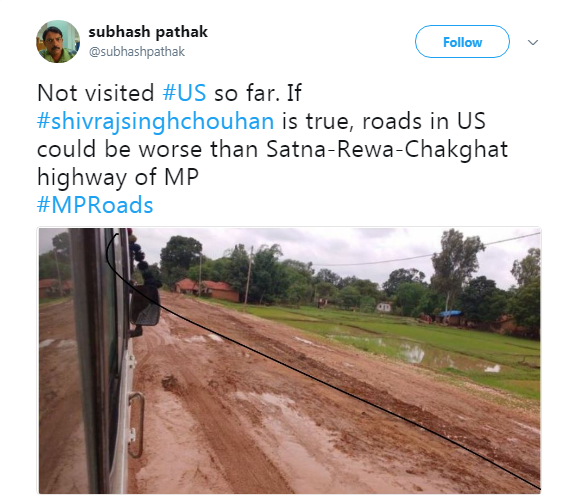 Tanzil Asif wrote “CM Shiraj Chouhan enjoying a road trip in Madhya Pradesh – crossing roads which are better than roads in US, of course”. He had attached an image in which Shivraj is being carried by some policemen on a waterlogged road. 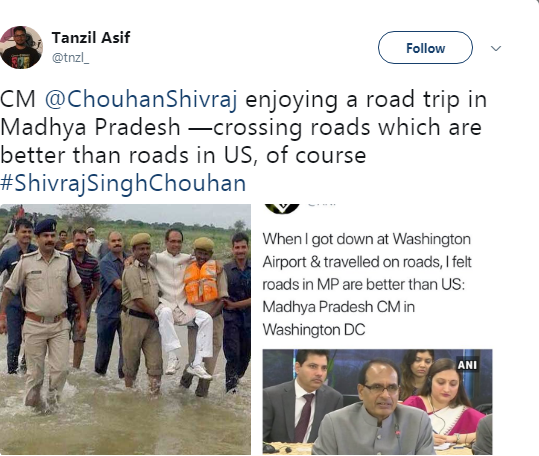 “On the way to inaugurate a new road where we do not even walk. Not everywhere in universe other than MP,” Joshy Xavier tweeted with the same image. 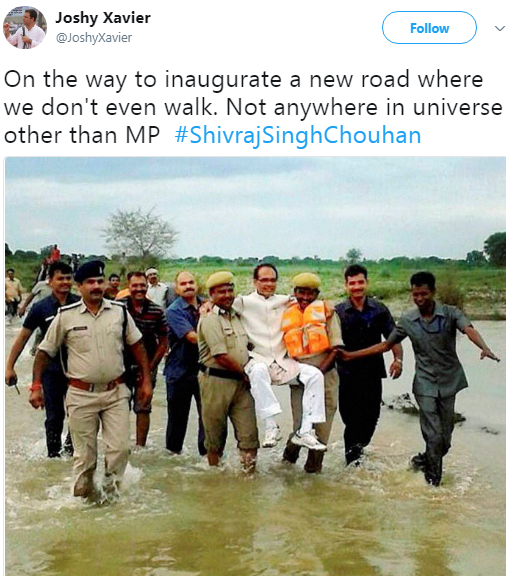 “Been repeatedly asking from where Bhagwat RSS BJP pick up gems like Shiv Raj Chouhan and I am yet to get an answer.” Natarajan Balan wrote in another tweet.

Zoombada’s tweet is more ineteresting. He had tagged an image of an upset truck. “A truck was found Sun bathing on a Goa beach… when asked… he said “why should humans have all the fun??” He tweeted. 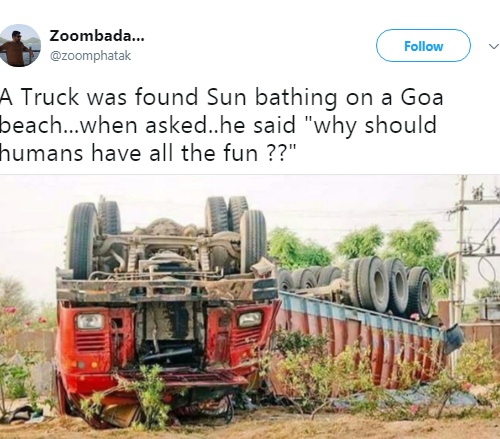 Pankaj Kadam wrote in his tweet, “Do not feel bad if MP CM Shiv Raj Chouhan lied about things, because we have seen PM!! If leader is liear then what followers do.”

Ex Chief Minister of Rajasthan also made fun of Shivraj claim. “BJP leaders are bluff masters! I wonder why they boast so much when abroad?” Gehlot hit two with one stone.

Madhya Pradesh and Mizromam Polls: MP sees a spike whereas Mizoram sees a dip in voting

November 28, 2018 The TMC Desk Elections, Politics Comments Off on Madhya Pradesh and Mizromam Polls: MP sees a spike whereas Mizoram sees a dip in voting

Madhya Pradesh, where the Congress is likely to dethrone Shivraj Singh, the three-timer CM and its party, saw a spike in turnout in today’s assembly elections. Mizoram, where the BJP is trying to wrest from […]