The Twitterati have expressed their grief and anger after the terrorists ambushed the bus carrying Amarnath pilgrims last night.

PM Modi tweets “My thoughts are all those who lost their loved ones in the attack in J&K. My prayers with the injured.” He adds to it that India will never get bogged down by such cowardly attacks and evil designs of hate.

Rahul Gandhi in his tweet from his official account says that he shares the pain & anguish of families who lost loved ones in the terror attack on innocent Amarnath Yatris today. He further tweets that India will never be intimidated by these terrorist cowards. 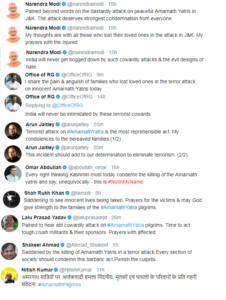 Congress former minister Shakeel Ahmad tweets “Saddened by the killing of Amarnath Yatris in a terror attack.Every section of society should condemn this barbaric act.Punish the culprits.”

Arun Jaitley who is also incharge of defense of India tweets that terrorist attack on #AmarnathYatra is the most reprehensible act. My condolences to the bereaved families. He further tweets that this incident should add to our determination to eliminate terrorism.

Shahrukh Khan also expresses his grief over the dark incident. “Saddening to see innocent lives being taken. Prayers for the victims & may God give strength to the families of the #AmarnathYatra pilgrims”, he tweets.

The Twitterati consist of a long and endless list. Every human being is in shock and dismay because it is the first time that in Kashmir Amarnath Yatris (pilgrims) have been hurt.

An uneasy calm enveloped the Kashmir Valley on Sunday as additional security forces occupied civilian installations and police stations and were put in “standby mode.” Late in the night, National Conference vice-president Omar Abdullah and […]