I have just finished reading “Yaadon Ki Baaraat”, Josh Malihabadi’s autobiography. Josh was a revolutionary Urdu poet known as Shayar-e-Inquilab! The original autobiography is in Urdu. I read its Hindi version, translated by Hansraj Rahbar and published by the good old Rajpal & Sons. The book is simply unputdownable and I read it from cover to cover holding my breath. A fascinating read about a bygone era. I wished I had been born during those glorious days

Josh Malihabadi was born as Shabbir Hasan Khan in 1896. He was from an Afridi Pathan family based in Malihabad, a small town near Lucknow, the city of nawabs. And Shabbir Khan was born with a silver spoon in his mouth. Or should I say a golden spoon. His abba was a big zamindar with untold wealth. As a small kid, Shabbir fed sugarcanes to his pet elephant! His abba travelled in a “paalki” borne by eight “kahaars”. A young Shabbir was homeschooled by 4-5 ustads. He was a child prodigy who had mugged up Persian classics like Gulistaan and Bostaan. But his doting father was against Shabbir going to a school. He was so possessive!

After Shabbir’s satyagraha, he relented and sent Shabbir to schools first at Sitapur then at Lucknow. As a young man, Shabbir joined the MAO College in Aligarh, only to be thrown out for playing a prank with his junior! At the MAO College (now AMU) Shabbir Hasan Khan was a boarder, staying at the Mumtaz House. By this time, he was also a full-fledged Urdu poet. His “takhallus” (nom de plume) was Josh Malihabadi. In fact, poetry was in his DNA. His ancestors were also renowned poets. In 1924, Josh Malihabadi became an employee of the Hyderabad Nizam. The Nizam respected him but soon Josh was kicked out of Deccan for reciting a nazm against the Nizam himself! He went to Datia and Dholpur to try his luck but to no avail. Then he came to Delhi, got monetary help from Sarojini Naidu, Bulbul-e-Hindustan and launched his own magazine Kaleem. The magazine prospered until his business partner deserted him. For some time, Josh Malihabadi worked at the Shalimar Pictures in Pune as a songwriter but lost his job when the owner migrated to Pakistan! He got the editorship of Aajkal, courtesy his bosom friend Pandit Nehru. 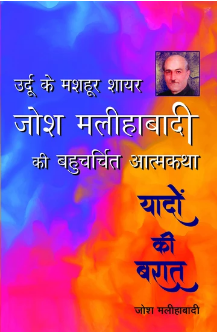 By 1955, Josh Malihabadi was being courted by Pakistan. Pakistanis told him that after Nehru’s demise, Muslims would be persecuted in India. Josh Malihabadi’s grandsons would be forced to wear dhoti and keep choti. And then Josh Malihabadi committed the biggest blunder of his life. Breaking hearts of Pandit Nehru and Maulana Azad, he bid adieu to Hindustan and became a Pakistani citizen! Tall promises made by his Pakistani friends soon turned out to be Narendra Modi’s “achchhe din”! Achchhe din never came and Josh soon found himself embroiled in the petty politics of Pakistan. People jealous of Josh Malihabadi made life miserable for him. Pandit Nehru called him back to India but shayar-e- inquilab was too proud to retrace his steps. The book makes the reader sad at Josh Malihabadi’s plight as a revolutionary poet sells his wife’s ornaments to keep the chulha burning!

The book is full of anecdotes. It also brings to light horrors of the zamindari system. How cruel the feudal system was. Sample this example. As a young boy, Shabbir Khan was a spoilt brat. He carried an airgun. One day, a poor barber’s son didn’t salaam him. Shabbir got so angry that he fired his airgun at the small kid. The metal ball pierced the little kid’s back. He cried in agony while the young Shabbir again hit him.

Josh Malihabadi was very close to top Indian leaders especially Pandit Nehru, Maulana Azad and Sarojini Naidu. Once Nehru fired his secretary for speaking lies to Josh on telephone. Sarojini Nsidu was like a sister to Josh.

Overall, the book is a captivating one. A must-read for all who take pride in Hindustan’s Ganga-Jamni tehzeeb.